Anand won his game this morning, so he’ll be going to the finals next week. He’s pretty excited, even though to be honest, he spends much of his time on the field trying to remember to actually keep his eye on the ball….

Kavi’s team won too, so both kids are in the finals next week. I’ll be in L.A. for World Fantasy, but Kevin will be there to cheer them on. Fun, and they both worked hard (even though neither is very good), so they’re pretty excited about it.

Anand tried to go and cheer for Kavi’s game, the way she did for his this morning, but his attention span ran out about ten minutes in, so I ended up running him home. He tried! He was quite apologetic, poor munchkin, but Kavi assured him that it was just fine. 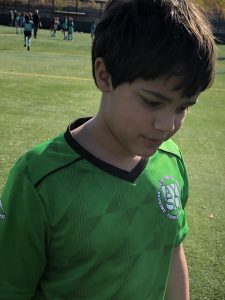