One of the things that was fascinating to me about yesterday’s event was seeing people’s reactions to cooking and eating Sri Lankan food for the first time!

For one, several of them said that it seemed much lighter to them than Indian food, which surprised me — I think that’s perhaps because they’ve only had Americanized restaurant Indian food, which tends to be loaded with extra butter / oil. (Which I think is common in lots of restaurants?)

But yes, Sri Lankan food is generally fairly light, I think. Unless you really load up on the rice, or the fried treats at parties. 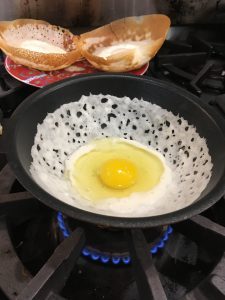