More than the usual number of people have been commenting on how much I do lately, so I will take this moment to note that I am more than usually busy and also more than usually tired this weekend. I’m not sure if I’ve caught some kind of bug or if I just REALLY overdid it when the massive clean-up on Friday, when I madly reorganized the playroom and Anand’s room and hauled furniture around and bagged up masses of old toys for either niblings or Brown Elephant. I had a free day with no meetings or paperwork due! Clearly I had to spend it in furious physical activity.

But whatever the reason, I was falling-down-tired by the time we got to Anand’s birthday party yesterday afternoon — guests arrived and I just waved at them from the couch (SO GLAD that we hired a friend’s daughter to help staff the party, because we sent her out to keep the kids from killing each other in the backyard with Anand’s basket o’weapons, while Kevin and I slumped together on the couch). And for board game potluck afterwards, where normally I’d be happy to play until 11-ish or so, I was totally crashing by, oh, I don’t know — 8? (Sorry for wussing out, guys! But Star Wars Epic Duels was fun.) 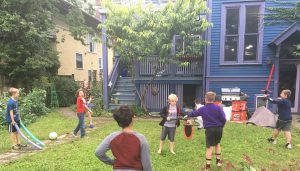 Kevin too, so maybe it is a bug of some kind, though that seems unfair, since we were JUST sick a few weeks ago. I want to get back into a regular exercise routine with some healthy eating, dammit, but today we subsisted on leftover party pizza and pumpkin pie, which is not exactly what I’d call health-conscious choices. It was really all we were up for, despite having slept MANY hours last night.

I managed to caffeine it up in time to make a batch of milk toffee with Kevin‘s sluggish help (thank you for chopping cashews, etc., love), and then pack some decor into the car and head over to Jake’s Place for the 3 p.m. event. Once there, I was energized enough by the other people (hooray, being-mostly-an-extrovert) to actually have fun at the event, talk to folks, act like an author, etc. But as soon as it was over, crash city. I came home, turned on the TV, and vegged out with TV and video games for a few hours. Anand and I popped a LOT of balloons in BTD6, and I’m all caught up on GBBO. (That poor custard tart!)

Now I’m pondering the remaining party dishes that need to go in the dishwasher; I think I can get up the energy to get one load in, at least. Kevin has taken Anand up to bed, and Kavi is sitting beside me, building her math homework ramp out of cardboard while I supervise. Luckily photo-posting doesn’t take much energy, so maybe I’ll do a bit more of that. But soon, sleep. Lots and lots and lots of sleep.

(The playroom is about 2 hrs of work away from being actually DONE, and it is totally grating at me, but I just can’t today. Maybe tomorrow. Although I also have a writing deadline that is what I should be working on all day tomorrow. (I miss you, writing shed. It’s been a month. Have you forgotten me?)

I think I’m going to have to push that, if my editor permits, because what I actually have to do tomorrow is prep for my classes, grade lots of little journals and exercises, and deal with urgent e-mail, including setting up for the SLF membership drive that is supposed to start on October 1st. Which is Tuesday. Oh, playroom. I’ll get to you eventually, I swear.)