Basement re-org! I stayed up ’til 1 a.m. last night organizing a third of the basement. It’s unfinished — no insulation, concrete floors, some rooms are just set off by framing without even bothering with drywall. But we did paint the floors and throw down some rugs in the main area, so it looks better than one might think. 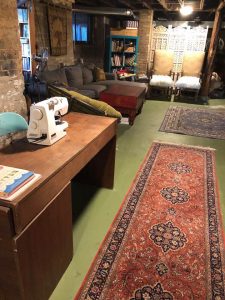 Now, staying up that late sounds ridiculous, but it’s actually a really good sign — the basement has been in dire, dire shape for months. We were just too busy to do more than chuck things down there, but I finally opened up enough time to work on it, through a combination of three things:

a) putting a big project down (alas, makerspace)

b) having people help me with massive paperwork backlog, which for the SLF + my writing business is really quite time consuming, esp. now that we’re indie publishing for real, and

c) just making myself slow down more, so that when I start feeling frantic, I take it as a cue to do less, which is somehow magically helpful, I think maybe because when I do go back to work I’m less tired / frantic?

The end result — yesterday, Kev and I opened up two boxes from Target and assembled wire racks, and I set up Feast on one of them and Perennial on another — books and event supplies and promo items, and now I can FIND things when I need them in a hurry, and SEE when we’re running low on things in time to reorder, and it makes me SO HAPPY.

Plus, I cleared the main area enough that we can now use it for family TV-watching again, which is a nice option to have back. (We don’t have a TV area on the main floor.) It’s also where I exercise with the Wii Fit, so easier exercise access, yay. That whole space was covered in boxes and assorted STUFF; you could barely walk through it. But I couldn’t put it away until I had both shelving and time.

What I really want to do is get started on clearing the exercise area, where the weights live — maybe if there’s less stuff draped all over the free weights, Kev and I might actually start using them again? Something to dream of.