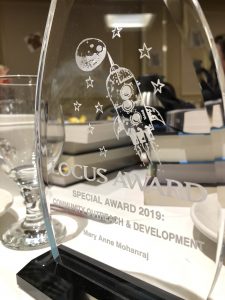 Here is my attempt to recreate my speech, on receiving the Locus Special Award for Community Outreach & Development. I was tremendously moved when I got the letter from Locus telling me about the award and asking whether I might be able to make it to Seattle to accept in person. It’s very nice to be appreciated. Very.

This is a new award; it was given once last year, to the Clarion workshops, and I’m its second recipient. I’m really pleased to see our genre making a move to honor service to the field; we’ve long had the Big Heart Award at the Hugos, which is wonderful, for service to fandom, but this feels a little different, more aimed at professional service? We’ll see how it evolves. 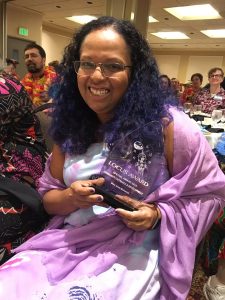 When I first started writing, I was twenty years old, writing erotica in the early 90s. I’d started writing erotica in large part because the silence around sexuality seemed so damaging — my freshman year at the University of Chicago, four different women came to me and told me about being date-raped, and while I absolutely don’t want to absolve any responsibility from the men instigating those acts, it was also very clear that there’d been some serious communication breakdowns in every instance, that things might have gone differently if those young couples had been better able to talk about sex. I hoped that writing publicly about sex, (whether good or bad), might help encourage people to talk about sex and change the culture.

It was the era where Congress was considering the Communication Decency Act — they were very worried, and were going to try to keep sex off the internet.

I’d been posting stories on newsgroups and on the early web for a few years at that point (my blog is the third oldest on the internet, according to the Online Diary History Project), and I had to think about whether I would be willing to go to jail to protect free speech, if Congress decided my site was now illegal. I thought probably yes, but I admit, it was scary, and at times, I felt very alone.

This was a time when you couldn’t buy erotica in mainstream bookstores — you had to go to men’s sex shops if you wanted that; that was true until Susie Bright started the Best American Erotica series, and Down There Press started Herotica, and eventually we got to a point where people were reading 50 Shades of Grey on the subway, but back then, people would hide their racy romance novel covers.

It was in that environment that a group of us decided to start Clean Sheets, an online erotica magazine, that eventually ran weekly for over a decade. It joined Nerve and Scarlet Letters (the latter of which also runs the fabulous sex education site, ScarleTeen, under the brilliant guidance of Heather Corinna).

I know for the Clean Sheets volunteer staff, we were doing the work of editing and running the magazine because we thought it was important. There was damage being done by the silence around sexuality, there was a need for open conversation on the subject, a need that we could fill, so we started a magazine.

Two years later, I handed Clean Sheets off to Susannah Indigo. I like seeing a need, figuring out how to fill it, getting the structure up and running — once it’s running smoothly, I generally move on to the next thing. Clean Sheets ran for a long, long time, but eventually shut down, which on the one hand makes me a bit sad — but on the other hand, I can’t be too sad, because the need has been filled; the world and culture has changed, and I think we had a small part in that. We did what we set out to do.

I started writing science fiction, and as a result of attending Clarion West in 1997, I ended up at a Diana Paxson party at Greyhaven in the Bay Area. I met Debbie Notkin there, and she invited me to WisCon, which was the first feminist science fiction convention, and which was trying to make an effort to diversify its attendees. I was a broke graduate student — I had done Clarion entirely on credit cards, and had no idea how I was going to pay them off — so I said I couldn’t possibly attend.

SF3, the non-profit that runs Wiscon, put together the funds to cover my expenses and brought me out. They’d identified a need, and they took action to try to fix it. (WisCon is my favorite convention; they paid my way that first year, but I’ve been back almost every year since then, on my own dime. Hopefully they consider that a good return on their investment!)

I served on the board for a few years, helping to create the Parallax and Kindred Awards; Carl Brandon has gone on to create the Octavia Butler memorial Clarion scholarships and more. The Wiscon POC dinner has grown to hundreds of attendees, and the field is entirely different now. I hope we helped a little with that.

Somewhere around 1999, I was at a WorldCon, attending a Campbell panel. The Campbell Award is given for Best New Science Fiction or Fantasy Writer. One of the panelists said he had counted, and there had only been 25 slots for new writers in the past year in the magazines and anthologies; all the rest were taken by established pros. This seemed like a really unfortunate and artificial bottleneck, and I wondered if we could do something about that.

When I got back home to the Bay Area, I called up some friends (and I have to admit, a fair number of them were people I’d dated — being poly may give you some additional resources when it comes to having exes you can call on for this kind of thing, at least if you stay on good terms with your exes…) and we had a meeting at someone’s house in San Francisco to talk about starting a magazine paying pro rates for fiction. We would call it Strange Horizons.

We wanted to do it digitally, to keep the costs down (at that point, Eileen Gunn‘s Infinite Matrix and Ellen Datlow‘s SciFiction were the main early digital SF magazines, so we’d be joining them), though we knew we’d get some pushback from people who didn’t see online publishing as ‘real’ — it’s sort of amazing, in retrospect, how prevalent that attitude was back then!

I’d do some things differently if I could go back in time; we were very focused on ‘money flows to the writer,’ so we prioritized being able to pay authors and artists, but we didn’t try to even pay an honorarium for editing and admin work, and these days, I would say that labor is labor, and should be valued.

But live and learn, and with funds raised from the community and a volunteer staff of thirty dedicated souls (and I have to shout out in particular to my sweetie Jed Hartman here, who served as senior fiction editor for twelve years and read a truly astonishing number of submissions), we managed to put out 51 issues a year.

I handed the magazine off to Susan Groppi after two years, and she ran it for a while and then handed it off to Niall Harrison — at this point, the entire original staff has completely turned over, and the magazine has been going strong for coming up on 19 years now — Strange Horizons will be celebrating its 20th anniversary in New Zealand at WorldCon, and please do come to the party if you’ll be there!

That’s 51 additional slots for pro writers; as a non-profit, we didn’t have the financial constraints of the other pro mags, so we didn’t have to worry about having ‘name’ writers — we just published what our editors loved, and were able to triple the number of pro short fiction slots in the field as a result, in one fell swoop. For many speculative fiction writers, Strange Horizons was their first pro sale — we’re tremendously proud of that.

So we saw a need, we came together with a group of friends and like-minded folks we gathered on the internet, and we made a thing to fix it. One of the best aspects of our genre is that it is full of such people and the organizations they’ve built.

From the enormous network of fabulous conventions run by the fans, to the Clarion, Odyssey, Viable Paradise and other workshops, to the Interstitial Arts Foundation, the Carl Brandon Society, funds like Con or Bust (which helps bring fans of color to conventions), the Tiptree Award (given for work which expands our ideas of gender), etc. and so on — none of those would be possible without masses of time, energy, and labor, the vast majority of it done by unpaid volunteers.

I know we have several current Clarion students in the room, and I’d like to say to them, and to all the writers listening to this — the best thing you can do for your career is to get engaged in creating arts culture. It will feed your writing in ways you can’t imagine, and it will make the field better.

If you see a lack — and our field is wonderful, but there are still lacks and problems and it could certainly be better — then step up and figure out what could be done to fix it. If there’s an organization doing good work that you believe in, join them, and give them your time, your energy, your ideas — maybe even your money, because you know that most of these organizations are operating on the thinnest of margins and a few extra dollars are always welcome.

If you’re looking for something to join, well, I must note that these days I run the Speculative Literature Foundation (www.speclit.org), which gives grants to writers, runs a SF/F reading series in Chicago, co-sponsored by SFWA and Chicago Nerds Social Club, and is working on expanding into local chapters and international translation and award efforts. If any of that interests you, we would love to have you join us with your time, your money, your energy, and your passion.

(I’m a little behind on my intention to organize volunteers at the moment, but I’m setting aside some time in July, so this is the perfect time to drop a note to me, director@speculativeliterature.org, subject line: SLF VOLUNTEER, and join the crew. I’ll forward your message to Colleen Waldie, who is helping me get this thing organized, and we’ll be in touch soon.)

One of the best things I’ve done in my life was starting Strange Horizons, with a team of thirty hardy volunteers who made it so much better than I could have possibly done on my own. Every one of these projects was a group effort, and we’ve had so much fun, working together to improve this genre that we love so much, and geeking out intensely along the way.

My high school best friend, Lisette, and I met over a Star Trek Diane Duane novel), and there’s an Irving Stone quote we loved: “There are no faster or firmer friendships than those formed between people who love the same books.”

However you choose to do it, I’m asking you to engage with the field. The rewards are immeasurable; this work has been one of the great joys of my life. Come join us! 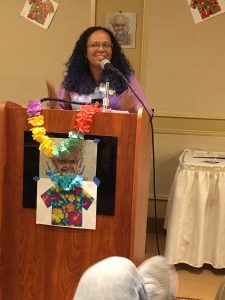