Today’s creativity / productivity retreat went well — we had five people attending, and I think most folks got some good stuff done. We’re going to continue them Wednesdays in July, 10-3, $5 — we should have an EventCombo listing up shortly, as soon as Amanda has a moment to put it together. My idea of ‘light snacks’ to accompany the tea & coffee is maybe slightly excessive. (But what if someone is HUNGRY? Can’t be allowed.) 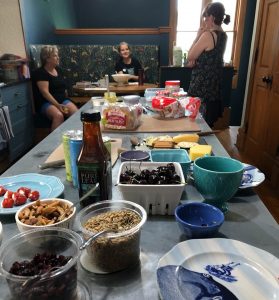 For myself, I got everyone settled and then went to go hide in my shed (taking a break to join people for lunch, then going back out there) and managed to do two picture book revisions, submit one of them, get ready to submit the other and also get ready submit a SF story. (Both of the latter will likely go out tonight.) So that was productive, and also only took about an hour, so I should’ve done it a long time ago, gah. All right, spilt milk, etc.

After that, I finally tried putting together a sort of mosaic of Jump Space universe stories and an interstitial story, which I’ve been wanting to do for weeks, and it’s been super-frustrating that I haven’t gotten to it.

I mostly learned, in the process, that it wasn’t going to be as simple as just cutting and pasting the stories together, not to get the coherent effect I wanted, which, honestly, I already suspected. It couldn’t be THAT easy.

The frame story opens with the protagonists watching the news coverage of conflicts elsewhere in the universe, as the war is developing, and then it cuts to the other stories, in between their narrative. I want to make those transitions smooth and intuitive, so you don’t feel too frustrated cutting away from the main story, and I want it to all build together strongly, to make something greater than the whole (rather than a sort of choppy fix-up where you can see all the painful seams) — that’s going to take some serious thinking and work.

But I also learned that I think it may actually work, if done right, AND that I already have 40K words just putting together the already published stories and the interstitial bits that are already written. Which is very heartening — that’s at least halfway to another book, so that’s nice. Very very nice. Tentatively calling this project _War Stories_, at least as a placeholder. So now in this universe, we have:

Um, maybe I had better start actually FINISHING some of these, rather than starting one after another after another… Tentatively plan is to basically work on Nalvarum and War Stories for now, try to finish up the former and get it out the door, and keep developing short stories for the latter.

Can I get through both before the end of the summer, while also continuing production on Feast and developing Maram (we had a good planning meeting this morning, and are starting to aim towards fall programming) and the SLF and taking care of my library board commitments and getting the house back in order, playing with the kids, clearing away some of the e-mail backlog, and relaxing with some good books? 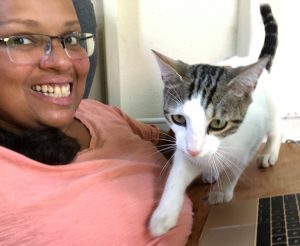 “What’s going on?” Narita stepped into the living room to find Amara curled in on herself on the sofa, crying soundlessly. The screens told her the rest of the story, and when she flicked on her internal net connection, the updates frenetically blinked a blazing red. The news must have come through in the last few minutes. She shut her connection off again – the screens were bad enough; she didn’t need it screaming inside her head too.

Tires placed around people’s torsos – not human torsos, of course. Humods, from Ariel, from the look of it, tall and thin, with arms and hands gene-modified to webbed wings. She’d read about Ariel in her humod med school classes; low gravity and air only a little thicker than Kriti’s, only marginally habitable without terraforming – but enough. It was the first colony planet which had inspired humans to deliberately change themselves to better suit the planet.

Some of Ariel’s colonists had wanted to fly. They hadn’t managed true flight, but they’d lightened their bones enough that when they launched themselves from Ariel’s jagged cliffs, they could catch the winds and glide.

They were flying now, flying and falling. Humans grabbing their tender wings, tearing the webbing.

It shouldn’t be so easy to kill. Lay a tire around the neck, press it down to immobilize the arms. Set the tire on fire and push the humod off the edge of the cliff. They fell, trapped and tumbling, burning and screaming. Amara had turned the feedback on high, so along with the thin, distant screams, Narita was buffeted with wind and heat and the smell of scorched flesh. There were hundreds of humods in the air, like tiny comets, blazing down in the dark. Night on Ariel.