I did some photo editing for the Sri Lankan cookbook this morning, but then switched to one last board game with Jed, who is heading home in a few minutes. He offered to change his flight and stay, but while I’m shaken, it’s not as if there’s anything he, or I, can really do about it from here. I told him to go home. Fly safe. 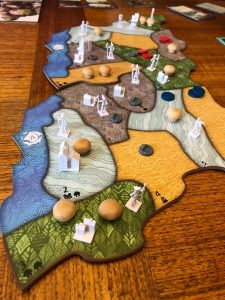 We’d planned to play 666 casino and Spirit Island, a game that we’ve been meaning to play for some months — we’d even set the game up last night, but hadn’t gotten around to playing. It’s a cooperative game where you play the spirits of the island, working with the locals to defend against foreign invaders. I welcomed the distraction of a board game, but at the same time, would periodically look at the island board and find myself tearing up. 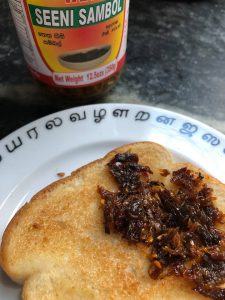 Sympathetic magic — ridiculous, and yet, there I was, wishing the spirits of the island might rise up, and speak for peace. In between rounds, I made myself cups of strong Ceylon tea and slices of toast, slathered with butter and seeni sambol. I ate them off the plate rimmed in Tamil letters, a plate that Kavi and I picked out at Paradise Road last December, when I took my daughter to Sri Lanka for the first time, so happy to show her this beautiful place that is half of her heritage, this island I love beyond all reason.

While we played, I kept using pauses (Jed’s a thinker when it comes to board games, where I am more impulsive) to check the news. The NY Times piece was slower to come out than some reports out of Asia, but is nicely comprehensive, and gives some good background for those not familiar. My little island has had ten years of blessed peace, after three decades of weary conflict.

I wrote ‘conflict’ and then ‘war’ and then ‘conflict’ again. I don’t know what the right term is, even now, after studying it for so long. How do we name this sort of terrorist action, when the opposing group is unknown or ill-defined?

I am teaching a post-colonial lit. class right now, and have just finished grading papers where many of my students wanted to argue that violence was justified against the invaders, the oppressors. Many of our texts, such at the Irish revolutionary poems and songs, led them in that direction. But I asked them, in just this past Monday’s discussion, if they were sure violence was justified.

How much violence? Against whom? What about suicide bombers, walking into peaceful places, killing children? Where is the line between freedom fighters and terrorists; is the line drawn in motivation? In actions? Ifyou are just a few individuals, trying to resist the power of an oppressive and powerful state, you might be drawn to unconventional forms of resistance, of warfare. Yet surely there is a line where you have gone too far.

And what if your motivations are grounded in hatred, rather than in oppression? What drives people to such extreme acts? My students had no answers for me.

Today, all I do is check the news compulsively, listen for what little word is coming directly from friends and family on the ground, try to piece patterns out of sheer incoherent horror. Desperate to understand.

Surely it wasn’t accidental that the terrorists chose Easter Sunday for this attack? One sourcelander friend suggested that the reason the big hotels were targeted was because they were holding Easter brunches, so it was actually the same population attacked in both hotel and church locations. Perhaps? 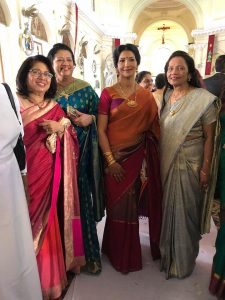 What possible threat could the perpetrators feel from a tiny percentage of Catholics? It makes no sense, no matter how I approach it. The photo below is one I took last December, of my mother, her sisters, and their first cousin, mother-of-the-bride at a wedding in a Catholic church in Colombo. I can still remember how it felt, baking in the heat of the church with Kavi leaning on my shoulder, watching my beautiful cousin come down the aisle.

I don’t live in Sri Lanka; I was born there, and left when I was only two years old. I was just talking to Kevin yesterday about how I don’t quite know how it was that so much of my writing work has ended up centered there. I didn’t have to write about that country; I didn’t have to feel connected, to care. And yet here I am, caring. But for all my study, and despite my relatives and friends who still live there, I’m not a stakeholder in the same way as someone embedded in the community. I have no answers, and even hesitate to ask the questions.

Yet, how can we not ask? Why did this happen? Why now?

Dangerous questions. We need answers, but as soon as you start framing the questions, it’s so easy to slide into us vs. them, reinforcing and reifying divisions — divisions that then lead to politicians and their rhetoric, and the cruel policies that so often follow. We are living that reality here in America, brutalizing those who flee violence to seek refuge on our border, tearing children apart from their parents.

I am not religious, but if I could pray, I would. I send messages out to the universe, composed of tea and tears. After so many years of peace — please, let us not descend into madness again. Please.