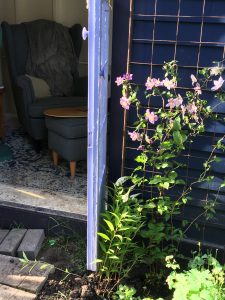 Plan for today — garden and write, prep for the next SLF fund drive, which was supposed to be this week, but I just couldn’t get it prepped it time — hopefully next week. That’s mostly it.

The kids are switching camps, going to Steve and Kate’s, which is a little more expensive but much more free form, which I think suits Anand better. I’m hoping they’ll both be happy there, so I can let them stay for several hours each weekday for the next two weeks and I can really sink into the work.

Plan for this morning — finish draft of novella; I’m so close to done. Just need to revise prior version of epilogue so it makes sense with this new draft. Then it’s going out to first readers — I’m really happy with the first 35K words, but the last 5K are all new, and I think may need some more work.

Well, and assuming the ending stays as it is, I probably will need to go back into the earlier material and layer some more stuff in, so that it builds as effectively as possible to that ending. But it’s really close. And oh, damn, I need a new title, because the old one really makes no sense now.

After that, the rest of the week is dedicated to Wild Cards, finishing up my story for Joker Moon, hopefully, and starting to draft my story for Three Kings. I’m not at all sure how much time that’ll take, and it’ll be intermittent over the rest of the summer, since it’s a mosaic novel with other writers, and we have to be responsive to each other as we go.

And after *that* — I’m a little waffly, honestly. Part of me wants to dive right back into the big SF novel, that I got 30K words into by last December, and haven’t really touched since. I think I could get a draft by end of summer. Part of me also wants to take a break from fiction, clear my brain a little, and do some memoir work. Lay down a first draft of the domestic resistance book, which should go fast, since the bones of it are all in FB posts. Hmmm…

This post brought to you by clematis, gooseneck loosestrife, columbine, and lamium. Need to get some mulch down over that mess on the ground, and sometime this week, I hope to find time to go to a stoneyard and hopefully find a nice big threshold stone, but it’s going to look v. pretty soon.