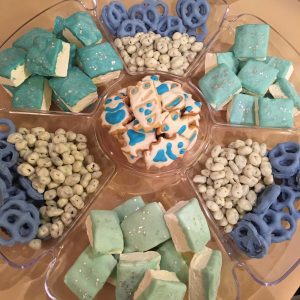 The SLF party went really well, and I’m hoping to do it again next year at WisCon and make it a regular thing. Keffy and Nibedita were there promoting Glittership, Beth had copies of her new book, Liminal Spaces, and I sold quite a few copies of my books — my original cookbook, in particular, sold like hotcakes, possibly because I was serving various curries at the party. Fun! I would change a few things — I ran out of time to make SLF materials, so definitely need to do that, and I think it’d help to have a slideshow running with information on the organization. Also, it’d be great if the room had a couch! We’ll see what we can do next year… 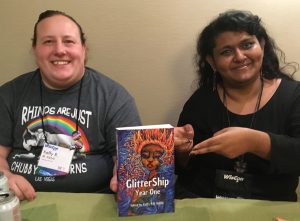 Elsewhere, there’s a discussion going about exclusive spaces at conventions, where the pros tend to gather, etc. And that’s a fine conversation to have, but I wanted to say that for me, as someone who has gone from fan to newbie writer to emerging writer to mid-career established — getting access to the pro spaces is not the most important thing.

I don’t want to discount access. It can be helpful, having a conversation with an editor or a senior writer or an agent at the right time (though the valuable bits never seem to come when you might expect them to).

Mostly, though, the vast benefits to my career have come from spending time with my peers, making joyful work together.

At this particular con, Diane Silver sent a note a few weeks before the con, proposing a spontaneous poetry reading to a few friends. It was lightly attended, but that didn’t really matter — it was a pure pleasure, reading and listening to poetry for an hour in the midst of a busy con. Making space for contemplation. It reminded me that I did some good work, when I was writing the cancer poems that found their way in Perennial. I haven’t written much poetry lately, so it’s a useful reminder to make more space for it. And then last night, at a critique session, Jackiesaid that she thought I should try to publish my poems before putting them on Facebook. And I honestly have never really considered that, and I’m not sure if I’m going to do it now, but the notion is spinning in my brain, so we’ll see. It may turn into something fruitful.

Another example — I met Kel more than 20 years ago, a friend of Jed’s. I went to their wedding, and I was delighted when they published “Miss Parker Down the Bung,” in the magazine I’d founded. It remains one of my favorite stories SH ever bought. Flash forward two decades — they’ve moved across the country, developed an interest in game design, and when Benjamin Rosenbaum is looking for someone to co-teach a game class, I think of Kel and put them in touch. Soon Kel was teaching classes on their own, and when I casually mention that I have an idea for a game, they put together a breakfast meeting here at WisCon with me and an artist and a student of theirs, and we sketch out a process for brainstorming a video game over the next few months — if it goes well, we’ll be Kickstarting it early next year. I couldn’t have predicted any of this from that first meeting.

Now I’m seeing out the last of WisCon with Anthony Ha, who I just met this year, sitting across a table at Michelangelo’s. Ben (another Strange Horizons writer whom I met a decade ago) put together a group reading with us and David Moles. I also met David around that same time — he and Ben quickly became two of my favorite people in the world, and I could listen to them amiably argue forever. I don’t know Anthony very well, but after a few hours reading his wonderful story and critiquing together yesterday and a few hours chatting in the hotel hot tub and our room, I can already tell I think he’s pretty great, and look forward to spending more time with him. And maybe some productive artistic collaboration will come out of it down the line, and maybe not — probably not, actually, because even just at WisCon, there are a hundred times more interesting people doing interesting things than I could possibly find time and energy to create with.

I suppose my point with all of this is that if you’re a new writer, and you’re going to a convention, don’t spend all your time and energy trying to hang out with the big names. Sure, a little bar time listening to Gardner Dozoisand Sheila Williams talk about editing Asimov’s was always entertaining and enlightening to a young writer (and now I’m missing Gardner all over again).

But — to the extent that your energy and sociability levels allow — just talk to people. Writers, readers, artists, costumers, filkers. Let them get to know you, know what you do, what you care about, who you are. Encourage them to share their own talents and passions.

Maybe someday someone like David Moles will make a chibi version of you and put it on a poster and slap it up on a wall, and then maybe someone will come up to you at the Signout with a copy of your book that came out four years ago and say they enjoyed your reading so much, and could you please sign this?

And whether or not that happens, in the talking and the laughing and the making art together, there will be a lot of joy. 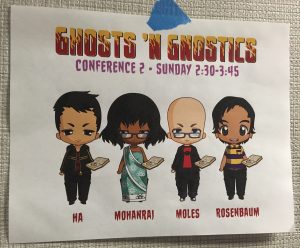