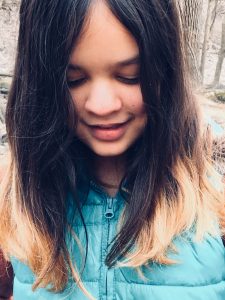 Thinking about my two favorite photos of the kids from our visit to the woods a few days ago. I was originally thinking of printing these as 8x10s and hanging them, but I got a little tripped up on gender politics. When I did my analysis of South Asian women’s book covers in American publishing a decade or so ago, there were some distinct differences in how women’s and men’s covers were presented.
Among other things, women’s covers tended to feature still female figures, with a strong focus on their bodies, often in close-up. Men’s covers tended to show male figures in motion, often quite small, but set against a large landscape or cityscape. 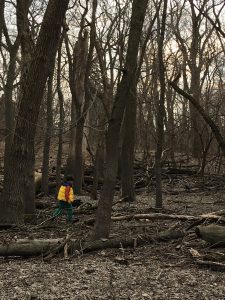 I didn’t mean to reproduce those dynamics when photographing my children, and maybe it’s just coincidence that these are the photos that came out well — or maybe I took more close-ups of Kavi’s face, and more distant shots of Anand moving through the woods.
Regardless, I can tell you one thing — I’m not going to blow these two photos up and post them alone on a wall anywhere. I don’t want them to internalize these images as messages of how they should be in the world. In a mix of other photos, they might be fine.
Kavi’s soccer practice starts tomorrow — I foresee a lot of action shots in her future. And I’m going to work a little on taking some close-ups of Anand’s beautiful face, even if I do have to work at it a little bit to get a picture that isn’t just him being goofy for the camera.