Facebook Instagram Youtube Twitter Patreon Shopping-bag
Menu
In hard times, do you want to read dystopias, or would you rather focus on happier things? It’s always a good day when a book arrives, though this particularly book may give you nightmares.
I was invited to contribute to this anthology, _Welcome to Dystopia_, right after the election. It was a terribly easy story to write — I basically poured all my worst fears into this piece. In the story, a Sri Lankan American woman in a mixed marriage with a white man must say goodbye to her mother, whose green card has been de-naturalized; she’s being shipped back to Sri Lanka. The only reason my protagonist gets to stay is that marriage to a white man. She’s worried about her young son, who is dark enough to be a target of the rising violence. And at the same moment she’s dealing with all that, her husband is taking their ten-year-old daughter to get an IUD, because they know they won’t have the option to get one within the year. Fun times.
Okay, now I’ve told you most of the plot of the story, so maybe you don’t need to read it anymore but there are 44 other similarly grim visions in this book for your…enjoyment?
“The noise at O’Hare is a dull roar of voices, rising and falling, dissolving into chaos. We must almost shout to hear each other, packed into long lines that press against each other, sticky in the June heat, waiting to get into a building…” 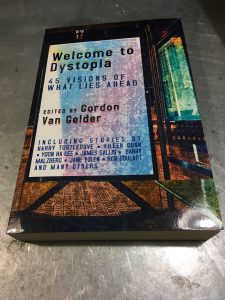