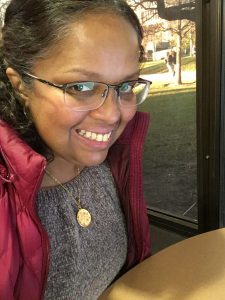 The slightly forced smile of someone recovering from surgery who still feels seriously oogy and would like to be curled up in bed under a massive pile of blankets…but who also hates to cancel the last class of the semester where she traditionally jams in every last thing she wanted to get across in this course, and so has dragged herself into campus — which is sort of hilarious as she is sure the students would much, much rather that she had cancelled class.

But we do the right thing, not what makes anybody happy, yes? You can tell I was raised a New Englander.

(Also, new glasses, to replace the ones lost in Miami. I think they look fine. The crispness of the leaves (I’ve been using an old back-up pair) is, as always, a miracle.)