First dahlia of the season, a little late, because I was busier than usual in May, and so I didn’t get them into the ground until June. That’s all right, but it makes me a little sad to see how small the plant is. I started planting dahlias about six years ago, putting them in the ground in spring, lifting them out in fall, right after first frost. Storing the tubers carefully in a cool, dry place, to replant again the next spring. Each year, the tubers got bigger, and the plants put out more stalks, more flowers. After three years, I was able to gather great big bouquets for the house, and still have plenty of flowers left on the plant for the neighbors to enjoy. 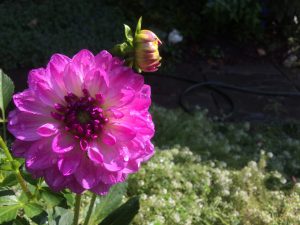 But in 2015, chemo was followed by surgery was followed by radiation, and I was too harried and exhausted to keep track of everything — I could have gotten help, but I completely forgot to ask someone to dig out my dahlias at the right time. So they all died, rotting in the ground. I was so angry with myself when it happened.

Yet here I am, healthy again. In spring, I bought some dahlias again, put them in the ground. This one is Claudette, a variety I particularly liked, that I decided to repeat; the others are new. Claudette is lovely, even if she is a little small and spindly this year. She’ll grow. Sometimes, everything burns down, and you just have to start over. It’s okay.