Facebook Instagram Youtube Twitter Patreon Shopping-bag
Menu
I keep coming back to what various people who know politics told me at the beginning of this process, which boils down to: “Anyone can win an election if you shake enough hands.” Statistical analysis shows that about 80% of people will vote for you if they meet you in person and shake your hand. Humans are herd creatures, pack animals. I have to think that some of this is purely biological, and you may or may not think that’s at all fair, but it is how people work. Most people would really like to vote for someone they know, and when you’re running for office, your main job is to give them a chance to get to know you.
In a national election, it’s obviously impossible to shake every voter’s hand. But at the local level, you can totally do it, if you really want to. It’s an interesting question, what’s the best way to do that. I was working full-time during this entire election, so any hand-shaking had to fit its way around my job. Luckily, my job is somewhat flexible — aside from the actual classes I teach, grading and prep can be done at weird hours of the night. That made it possible for me to attend weekday morning and afternoon events, which let me meet a group of voters who might have been hard to access otherwise.
The weather was a real barrier for me. Starting the campaign in December meant that if I’d been canvassing then, I would’ve been walking through Chicago winter. I hate being cold. Hate it hate it hate it. I was told to buy long underwear and suck it up. I admit, I didn’t do that — instead, I booked myself into every single indoor community event I could get to for Dec – Feb, often one every evening and three to four on the weekends, and only started outdoor canvassing in March. Was that a mistake? It’s impossible to tell now.
If I ran again, though, I would do more canvassing. That’s the main thing I would change about how I ran the campaign, if I could go back in time. I would target it carefully, time-wise, because a lot of people aren’t home during the workday in Oak Park, so I’d aim more for weekends and maybe 5-7 p.m. I feel awkward interrupting people’s dinner prep, but if I believe in the public good of the office I’m running for, then that’s worth a little social awkwardness.
And I would probably spend a little less money on materials, and a little more on paying people to canvass for me. I only sent my student workers out to canvass this final week — I should have organized better and sent them out sooner. At least some of them (the ones well suited to this kind of public engagement, like Zeina Yacoub) said they actually had fun talking to people, enthusiastically telling them about me and my campaign. I’m pretty sure Zeina got me quite a few votes, and the stats say that 50% of the people your canvassers talk to will vote for you. Not quite as high as the return on the actual candidate’s efforts, but still, nothing to sneeze at!
Sarah Glavin beat me for first place by about 80 votes, and I’m looking forward to sitting down with her for a cup of coffee and finding out how we ran our campaigns differently. I suspect she did a lot more canvassing than I did, in the end. We’ll see!
I will say, though, that the comment I value the most, is from the woman who said she watched one of the recorded candidate forums, and then voted for me based solely on the merits of what I presented there.
Every vote warms my heart, but that one gives me confidence that I’m actually the right person for the job. 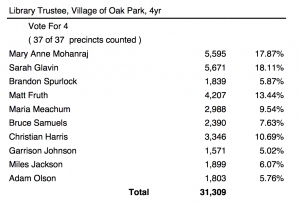