Sri Lankan cookbook club: I think I can finally say that, after making it a dozen times this past winter and measuring temperatures carefully, I have milk toffee (aka what they call pralines in New Orleans) down. The key is taking it off the heat at 235 degrees, soft ball stage. Roshani’s family has given their stamp of approval.

My vatallappam, sadly, was a swing and a miss — the custard didn’t set, but I learned something. At first, the aunties thought I hadn’t used enough eggs, but it’s the same recipe I made a few weeks ago which set perfectly, so that shouldn’t be it.  Roshani thinks that my problem was old eggs. From a comment on a cooking site: “As an egg decomposes, water vapor and gases are released through the porous shell. This is what causes the yolk and whites to shrink which in turn makes the air cell larger. Some ambient air enters the shell as the water vapor and decomposition gasses leave, but overall the mass of the egg is reduced.” Next time I make custard, I’ll make sure to buy the eggs just before cooking — the ones I used this time had been in my fridge for weeks and weeks. Oops. 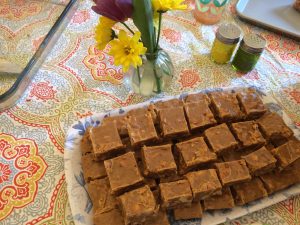