Kavya started Lumberjanes tonight, and a few pages in, called me over to explain something to her. “Mommy, they’re all girls! But they don’t all look like girls.” So then we had a conversation about which ones looked like girls, and which didn’t, and why, and whether mommy looked like a girl, and why, and I’m not sure I convinced her that girls could dress and style their hair any way they wanted, but possibly.

And then I told her that women used to not be allowed to wear pants, and she cracked up. She thought that was the funniest idea. Kavi said now women were allowed to do anything men could do, and I said, actually, that’s not true. But it’s almost bedtime, and that’s a long conversation probably better for another day. 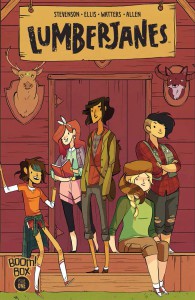