Facebook Instagram Youtube Twitter Patreon Shopping-bag
Menu
Cancer log 101: There you go -- shaved head. Eep. It admit, I was putting it off, but the last few days, the rate of hair falling out has been accelerating, and my hair was starting to get really thin and patchy. It was time. 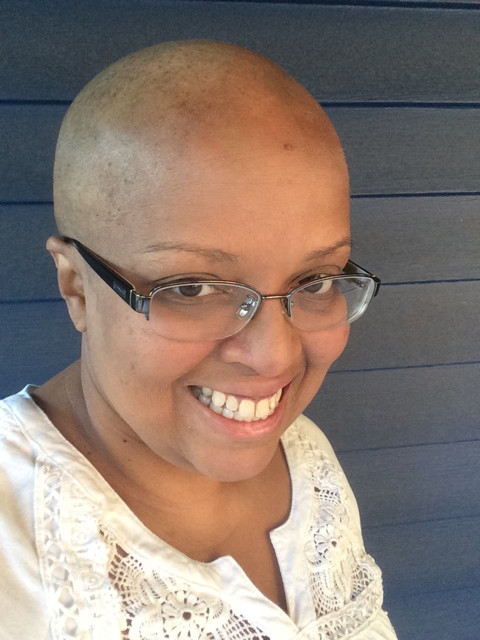 The actual shaving was fine -- glad I had Kevin do it instead of going to a salon. The kids were interested, but not upset; we've been talking about it for a few days, so it wasn't a surprise. Kavi is strongly advocating for a henna crown, but I told her I'm going to live with this for a while first and see what I think. It feels strange -- I can feel every little breeze on the top of my head. Funniest bit isn't visible in this photo, but there's a bit of my scalp that's slightly blue on the left -- if you dye your hair before shaving, you may need to soap your head several times to get all the color off. :-)

I think I'm basically feeling okay on the attractiveness / femininity front; I know some women feel very upset about losing their hair, but I've had it really short before, and I know it'll be growing back in a few months. And it turns out that I like the shape of my head fine, which is admittedly a relief. It also helps, I think, that my face is a little thinner than it's been at other times; I wish it weren't so, but I think this would bother me more if I felt like I had a really round, cherub-like baby face. Stupid internalized societal beauty standards; I love round faces on babies; wish I didn't resist the idea of having one myself. Sigh.

The much bigger stress point, I think, is that I *look* like a cancer patient now. It's funny -- if I were male, I don't think the effect would be nearly as strong. I'm writing this on my front porch, and a bald guy just jogged past. Lots and lots of men shave their head, but women almost never do, so if you see a bald woman, she almost certainly has cancer. I'm not looking forward to being so visibly marked; I'm bracing against what I expect to be a small onslaught of new expressions of concern, good wishes, etc. I'm glad I already told Anand's school about it; all the teachers know. If anything has me wearing scarves and bandanas and hats a lot, that'll be it -- not wanting to answer questions. Everyone means well, but it gets tiring.

Still, this should be manageable, and not as bad as it might have been. Onwards.

8:00 update: Just spent an hour gardening in the front yard as about twenty people walked by (we're on the path to the train), and while one person stopped and told me my garden / house were beautiful, and another let his 10-week-old puppy off leash to play with my on-leash dog (v. cute, puppy bounding around like mad, Ellie figuring out how to play with him while on leash), no one a) stopped and stared, b) pointed and whispered, or c) commented on the bald head. Which, of course, it's ridiculous to expect anyone to, but still, reassuring.