Woke up from rough dreams in which my children and Kevin were unhappy because I had messed up various things. Apparently even I cannot avoid the mommy guilt entirely. Even though I know they are all FINE. Perhaps I will make them Skype with me later today, so I feel better.

It made for a slow start; I was cranky and not ready to leap out of bed and work. Instead, I watched the end of a show I�d fallen asleep watching last night, the second episode of _Blood Ties_. Why am I watching an old series from Lifetime? Well, the internet is rocky enough here, particularly at night (oddly enough) that I can�t really use Netflix without too much annoying stopping and starting. And at some point, ages ago, I bought the first season of this series and it�s been sitting on my laptop ever since. I was intrigued, because I loved the books � there�s a threesome, and a vampire, and a cop, and an investigator, and Tanya Huff�s writing is smart and funny. So I finally watched some of it here, and it�s not bad � more gritty that I might prefer (I really am not a fan of gore). But what I was most struck by was that all three protagonists are not just white and skinny, but also blonde. The series was made in 2006, which doesn�t seem long enough ago for such a white, white cast. Keeps weirding me out.

I�ve had leftover curry and tea now, and am settling down to work. My goal is to make serious progress on the YA today, maybe even finish it, so that I can at least start poking at the memoir tomorrow. We�ll see if I manage it. It�s a LOT of work, and my arms may give out before my brain does. I�m planning to take another midday break to go to the beach and throw myself in the lake again for an hour. And Roshani may come up for dinner and critiquing; I sent her part of the YA book and asked her to look at some problem sections. So we�ll see. If I finish the draft tomorrow, that�s okay. That�s probably more realistic, really. But sometimes, ya gotta dream big.

I'm sitting in this wingback chair right now, and will be working at the desk in a moment. I love the detailing on the ceiling here, how they made a virtue out of what I assume is necessity, as the roof slopes down, by adding dark wood trim to define the bed space and make it feel cozy and intentional. 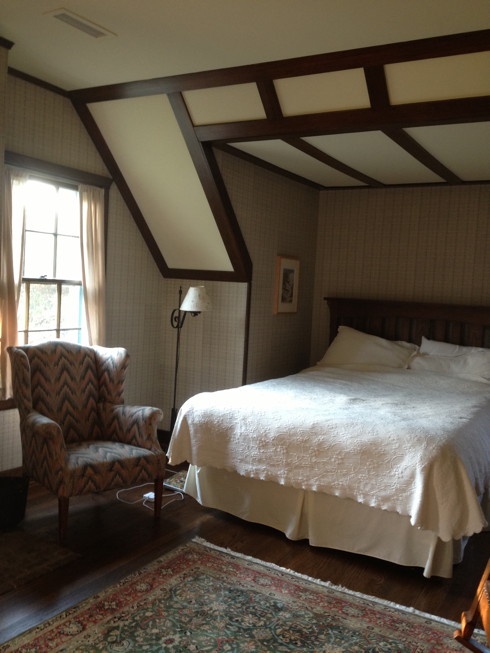 The ergonomic chair really doesn't fit the aesthetic! But it is comfy for long stretches of typing. 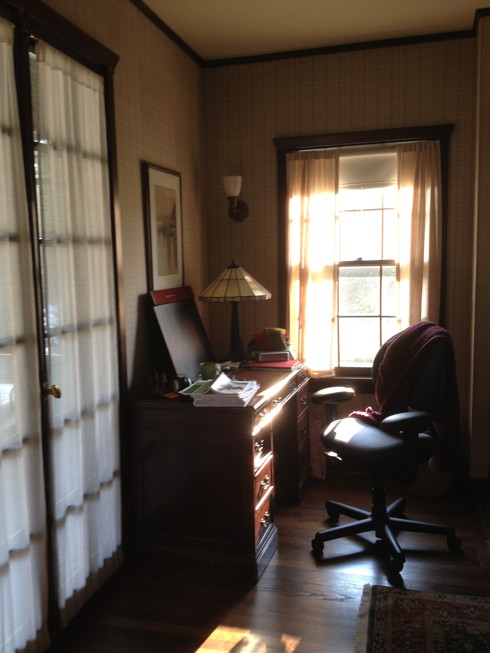