Menu
There comes a point in growing out my hair when the sheer mass of it makes me want to just chop it all off, even if at the very same time, I have the desire for princess-like tresses. Especially in a Chicago summer. Luckily, a stylist at one point years ago made me aware that there was such a thing as 'thinning shears,' and that she could, with a few waves of her magic shears, relieve me of quite a bit of mass while leaving some length behind. I am incredibly lazy about getting haircuts, but today I just couldn't take it anymore (I blame excessive heat + humidity) and finally went to the salon (I think it's been two years) and said to please please please for the love of God take some of this off. Which Stephanie did. 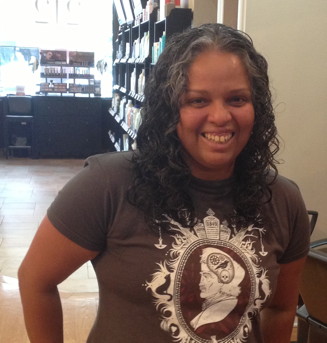 She then insisted on putting goop (Aveda Be Curly) into my hair, which, admittedly, is the same stuff I use myself when I'm getting ready for work, but even though I warned her that I was just going to be typing at home all by myself the rest of the day, Stephanie's professional pride apparently wouldn't let her just let me throw it up in a ponytail and wander off. So she then spent ten minutes making individual little ringlets out of my hair. Which I admit, does contribute to the whole princess feeling, so I guess I'm okay with that. She even snapped a pic of me, just for you. I tried to get one closer up myself, to show you the ringlets, but please forgive the mad scientist expression on my face. I am apparently incapable of taking a self-portrait without said expression. Which is going to interfere with my plans for world domination -- whoops, did I say that out loud? 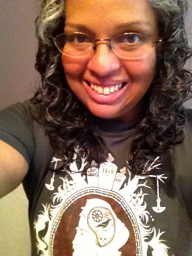 None of this, of course, answers the burning question of whether I should go back in next week and get a few tips dyed cobalt blue. I am pretty sure the answer is yes, if I can get over my laziness. She tells me that they will fade to turquoise, which will also be lovely. And if I hate it, I can just cut the tips right off. If I do it soon, then I'll have six solid weeks of summer to consider it before the school year starts again, so I can decide if I want to color it again for the semester. Okay, yes, I've basically already decided to do this, and any pretense that I'm still thinking about it is just my way of nerving myself up to it. Fine. Sort of like this, but the streaks wouldn't be nearly as long -- more like an inch or so near the bottom.

2 thoughts on “There comes a point in…”