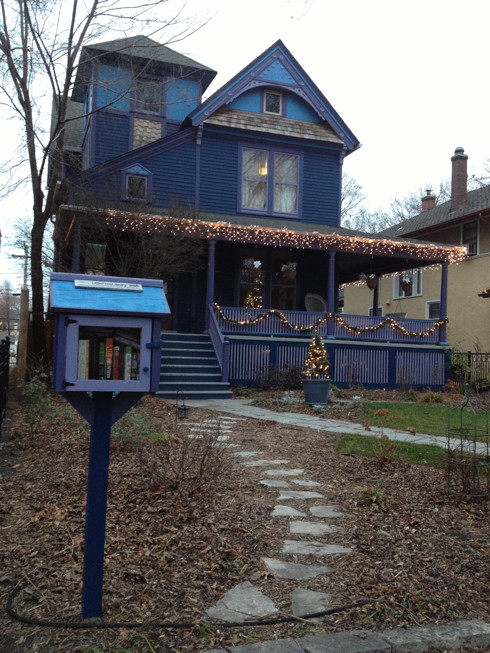 I am proud to say that Dobek, the guy who built our house, complimented me on what a nice job I'd done with the lights. Yes, I hung them myself. Yes, a strange woman crossed the street to fret at me because I was clambering around on the roof (while ignoring my neighbor Ron who was doing the same thing on his more steeply-pitched roof). The ones on top of the porch twinkle. The garland and tree are pre-strung and fake greenery, since I'm planning to haul 'em out every year from now until the end of time. I would sort of like lights higher, but that might require professionals on ladders. Maybe we'll just do candles in the upper windows. And a string of lights around the book house next year? 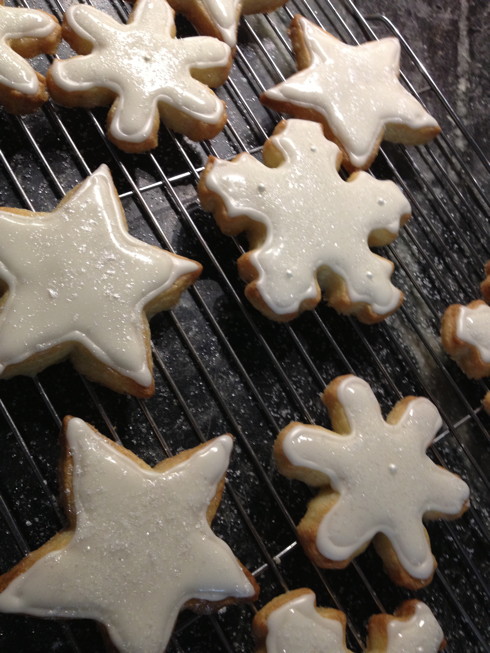 This is the year I mastered iced sugar cookies. Okay, not mastered, but still, a vast improvement over last year's efforts. This time, I tried a recommendation to use the same thickness of icing for outlining and flooding the cookie, which definitely saves some effort, but does make a more visible demarcation, which I think I'm okay with. Maybe. 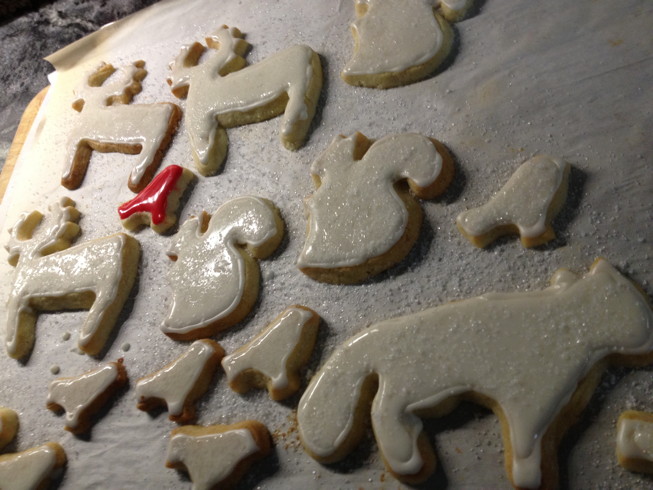 I also made a set of winter woodland creatures (set from IKEA, I think, possibly two different sets). I thought having one red bird in the mix would be cute, but it didn't quite work -- I think I needed a darker red for the right effect. And maybe all the birds in red. Hmm.... 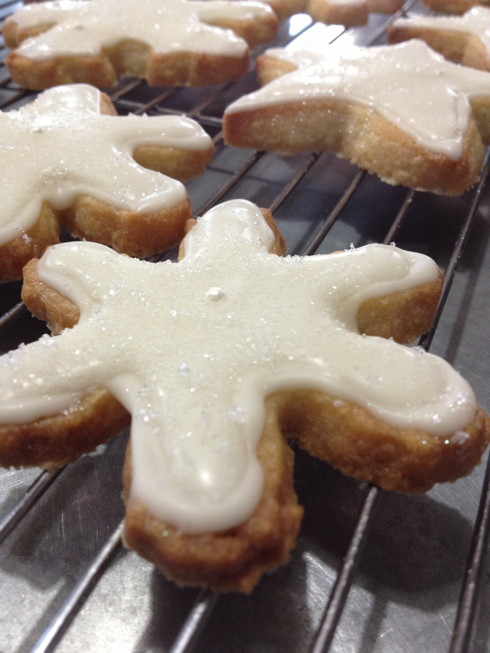 I dusted these with pearl dust (not so visible), and white sanding sugar (better), and decorated with a few little pearls. Love. 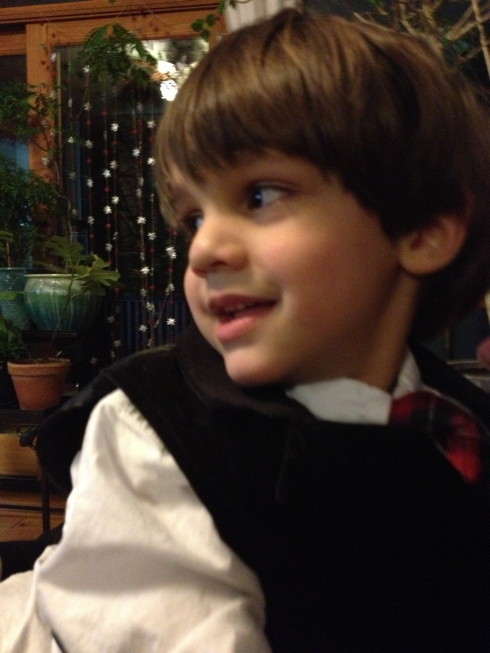 Our neighbors across the street have a fancy Christmas party every year, with truly stunning decorations everywhere and sumptuous Polish catering (mmm....pierogies!). Here's Anand in his holiday togs (you'll see these again for Christmas Eve). Love the garland of red and silver stars behind (from Ten Thousand Villages). 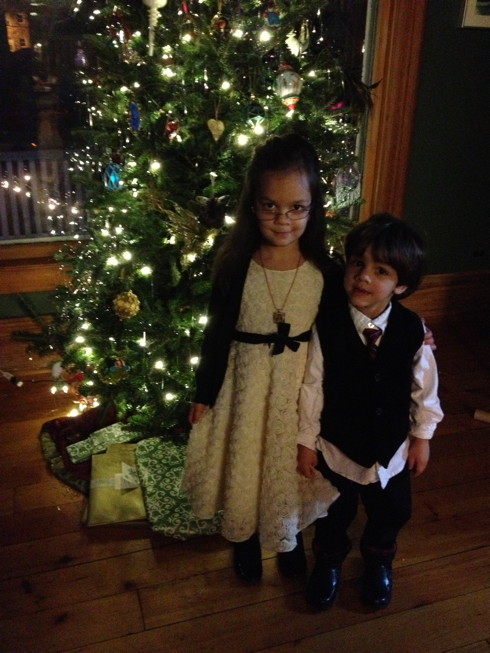 It's tricky getting them both to pose together -- they tend to look a bit stiff. But I'm grateful they're willing to try, if only for a moment. 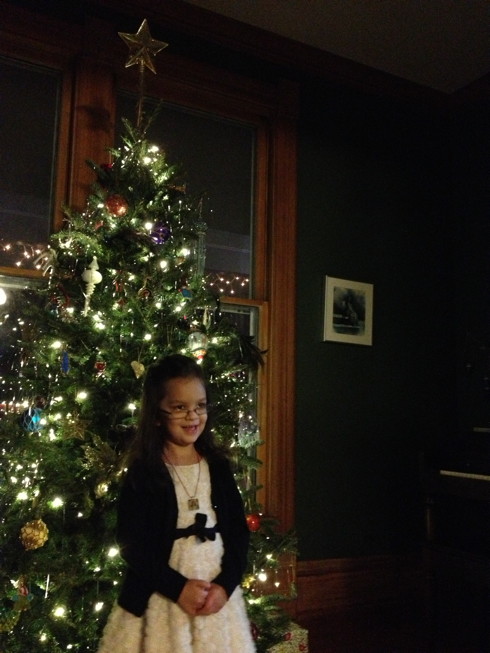 Smiling girl. At first, I thought our star was awkwardly high, and I was thinking of getting clippers and cutting down the top some. But it's grown on me -- sort of a Charlie Brown Christmas kind of look, that goofy star way up on a somewhat barren stick. :-) 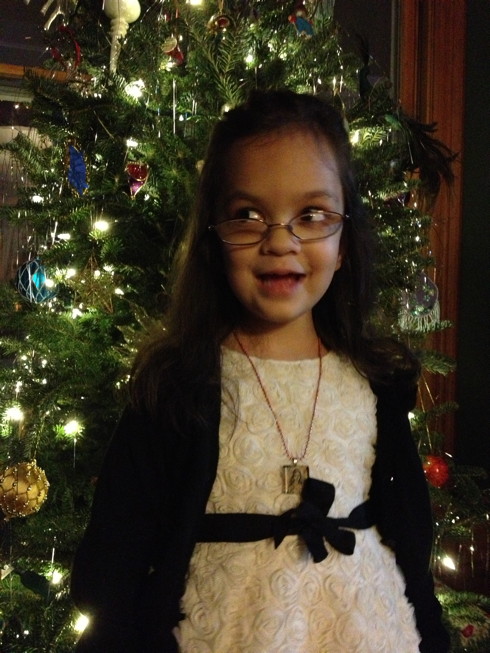 That pendant she's wearing is a Rackham illustration of Alice in Wonderland. She looks a little like Kavi. 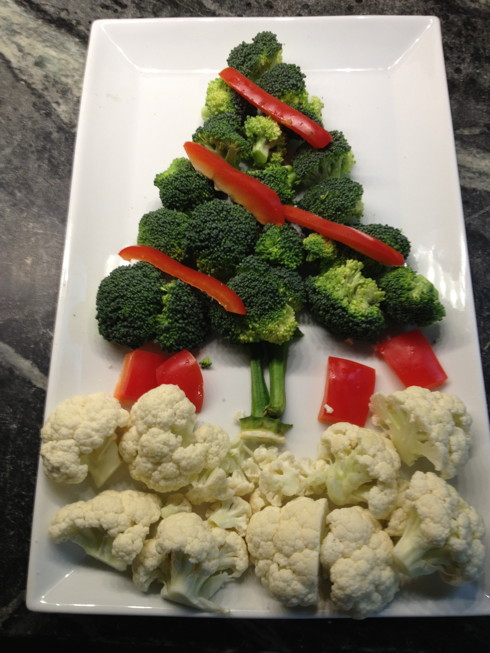 Ah, the seasonal veggie tray. I remembered to make dip this time, so the veggies actually got eaten. Well, most of them. 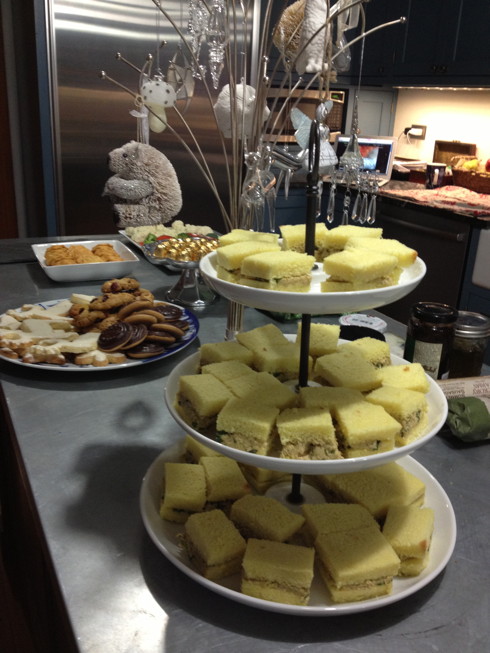 These sandwiches are always very popular; our own recipe, a variation on one from Epicurious. Poached chicken breast (although you could cook it anyway you wanted), shredded. Mix with one can green curry paste (I recommend Maesri, available on Amazon), a couple spoons of mango chutney, maybe half a cup of mayonnaise, fresh lime juice, and chopped fresh cilantro. Serve on potato bread. I'll do up precise measurements sometime, but mostly, I just mix to taste, depending on how much chicken I have. A big party hit at our house. 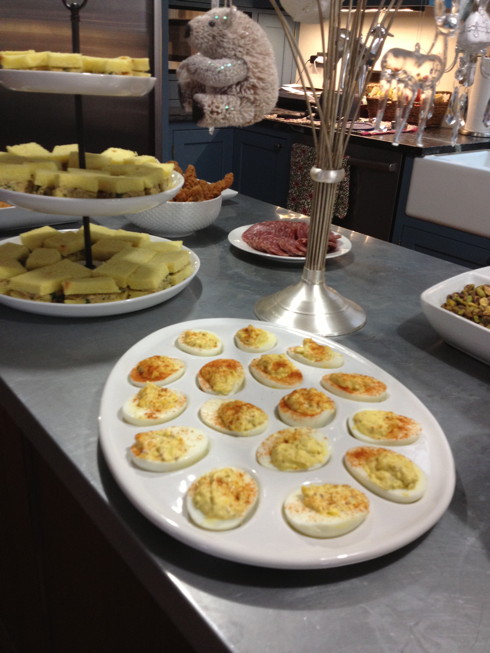 Someday I will stop being so lazy and actually pipe the filling for my devilled eggs. My mother would be appalled. Althogh at least they were still delicious. 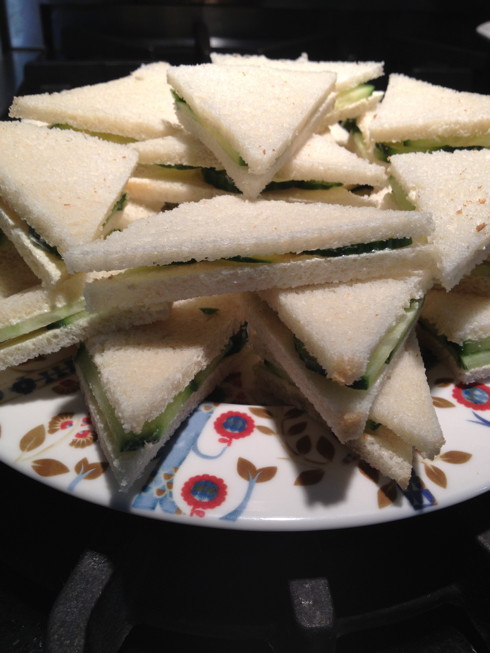 Classic cucumber tea sandwiches. Use Pepperidge Farm thin white sandwich bread (which I can usually find at Jewel), English cucumber (the skinny one packed in plastic, which is less watery than regular), and a thin spreading of butter on both slices. Most delicious when cut into triangles, I don't know why. Save the crusts to feed the birds or to make into bread salad (yum) the next day. 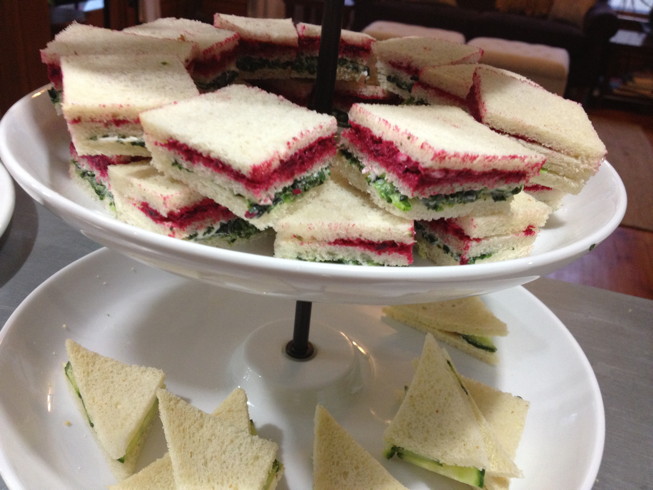 Christmas tea sandwiches -- chop beets fine in food processor, mix with cream cheese, sour cream, salt and pepper. Drain chopped spinach, ditto. I wanted these to be kid-friendly, so I stopped there, but the tastier version adds some chopped green chilies, yum. :-) The classic Sri Lankan version also has a layer with carrot (shredded in food processor), but it looks somewhat less Christmas-y then, IMHO. 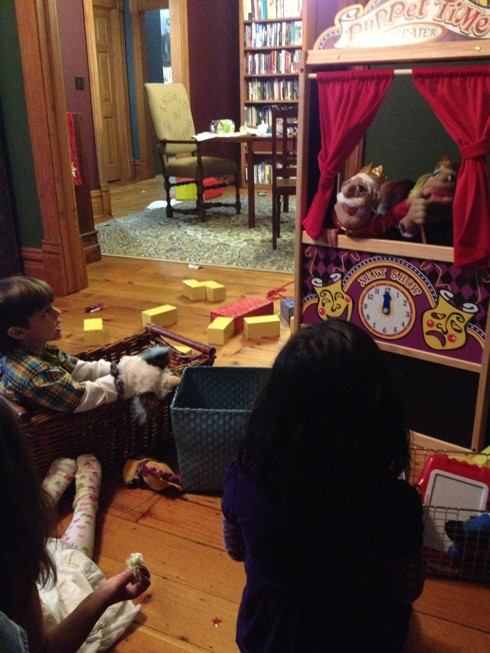 Simone's kids, Paris and Jazz, put on a puppet show for us (theatre a gift from Kevin's parents last Christmas). Our kids were enthralled.