Facebook Instagram Youtube Twitter Patreon Shopping-bag
Menu
If, per last entry, no one is actually listening anymore, why do I feel compelled to keep blogging? I suppose it's no sillier than a paper diary, in that sense -- a place to reflect and record one's experience of the world. Hmm... I'm going to pretend I'm still actually talking to someone though, okay? Feels a little less silly that way.

Here are some random pics from the last week or so of renovation -- I got a little behind in blogging them with all the end-of-semester-imminent-move-madness. In this one, the guys are installing new crown molding, which we had milled to match the existing ones on the first floor. It was insanely expensive -- that was the biggest shock to us, I think, how much custom-cut wood trim costs, even in just pine. But it does look nice now that it's up. The house looks much more finished with all its trim installed. 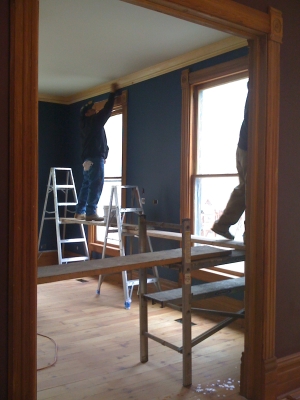 The original wood, we stripped and then just applied pure tung oil. For the new wood, if we'd done the same, it would have looked incredibly patchy, especially since there are a lot of places within rooms that are mixes of old and new wood, since we saved as much of the old trim as we could. So we stained it before oiling -- it took two coats of some stain to get a similar richness of tone to the old wood. You can still see the difference (especially since the old wood has a lot more nail holes etc. in it), but I think the final match is reasonably close. 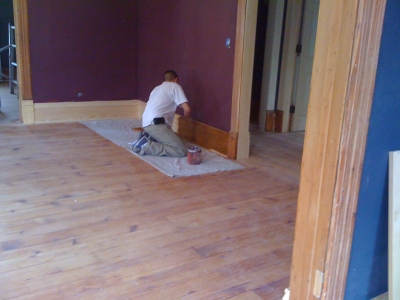 Here's our island, finally installed. The kitchen's looking better, though I can't wait for the countertops to come in! That Sub-Zero fridge came with the house, and with the fridge door panel in the wood of the old kitchen. We thought about having that painted to match the cabinet color (would have cost about $400 to have it done in a cabinet-grade finish), but in the end decided to replace it with a stainless panel instead. Which cost too much, but not as much as the original Sub-Zero fridge cost. Those panels were delivered yesterday, so I'm hopeful we can get it installed this week, whenever I can have the service people come out to repair the leaking icemaker (that also came with the fridge). 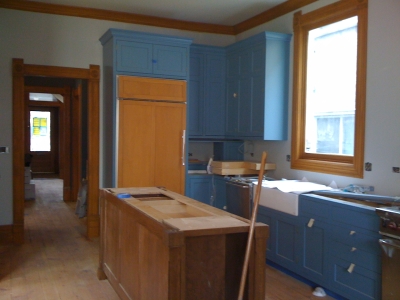 Ooh, and this is fun -- the fabric for the eat-in area arrived. Love it! Do you think I should tuft it when I build the seat back? It's a busy enough print, I'm not sure it needs tufting; maybe a smooth padded back would be better? I'm pretty happy with the color -- the blues aren't quite as bright as the kitchen cabinet blues, but I think it's close enough to blend harmoniously. And I like that the pattern is a) vaguely medieval/Moroccan/desi, b) vaguely floral, c) colorful and cheerful for the kids, who will be using this area the most, esp. for breakfast. 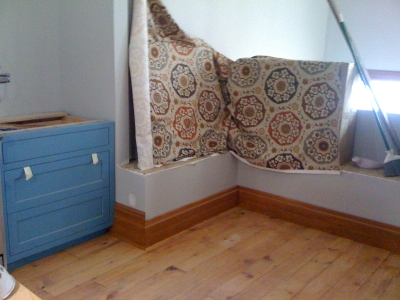 The seat will be oak to match the island (as well the end cap on the wall behind the eat-in area). I'm thinking we'll try just a plain oak seat for now, and if the kids complain, I might sew a separate cushion for it. It seems sort of futile to do an padded seat (like the back), since they inevitably spill a lot, and it would be very hard to clean. If I do a separate cushion, I'm not sure whether to do it in the same fabric (I think I'll have enough left over), or just a plain blue or brown or some such. That decision can wait, I think. We still don't know who we're going to have build our seat back -- the cabinet-makers' quote came back twice as high as having Pam's guys do it. But presumably the cabinet-maker will do a better job. A much better job? I'm not sure. Argh. We'll try to decide that in the next day or two, because it'll take a month for the seat to be built after we put in the order. 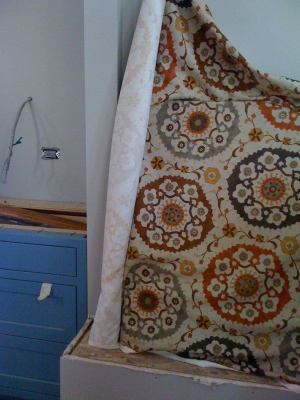 Another element recently installed were the push-button switches. We'd hoped to do them for the whole house, but budget didn't permit; we just went with regular off-white toggles on the second and third floors, in the grand Victorian tradition of cheaping out when you go upstairs. :-) But the first floor maintains that Victorian charm -- and I love the solid feel of the switches, the slight effort to push them on and off. Subtly mechanical and steampunk-ish, I think. And they just look cool.

Here's a question for you -- is that light too low? This is one that Pam salvaged for us from one of her other houses, and I like it a lot. But it's meant to hang over a dining table, which is why it's so low. Too low? We can see if Two Fish can trim and rewire it to hang higher, but I'm just not sure whether that needs to happen or not. We do plan to have a library table in that room, so it would be centered over that, in theory. Which might mean moving where it's hung too. Maybe we need to wait until we put a table in that room to see? When I first walked in and saw it, I was certain it was much too low, but now I don't know. It looks okay in that pic. 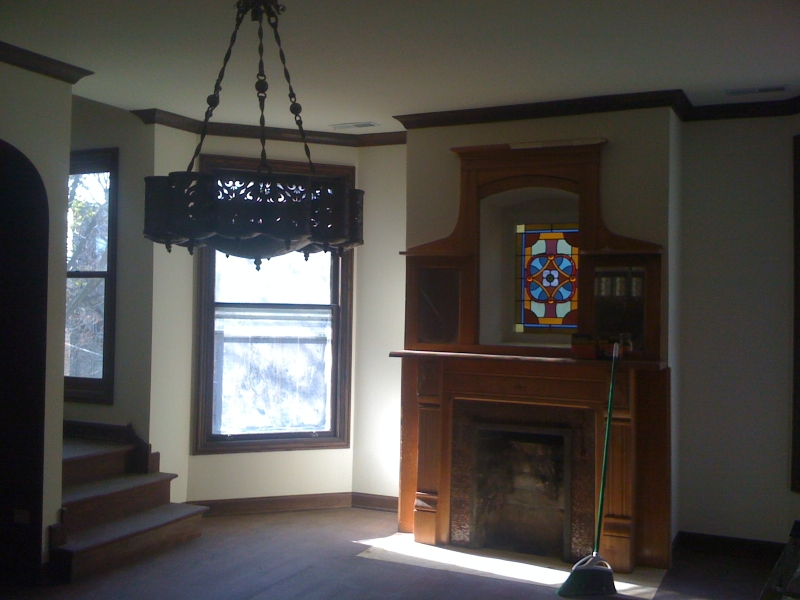 We're finally grouting too! Here's the guest bath, grouted -- I really like the Dove Grey grout with the Porcelanosa tile. The pattern on that tile is complex enough that I wanted a grout that mostly disappeared, and I think this one works well. 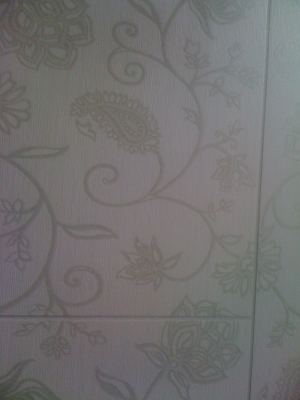 And you remember all my fan confusion? I did pick two of them -- a cute mini ceiling fan from Home Depot, the Metarie ($55). Because of the attic angles, they don't have a lot of flat ceiling space, and while a regular small fan would have fit, it would eat up the whole ceiling, and I think look a bit overwhelming. So instead, I went with this mini-style fan, and I think for a kids' room, it's cute. It moves a lot of air, too! I did Kavi's in ORB, and Anand's in brushed nickel, and I think they both look cool. 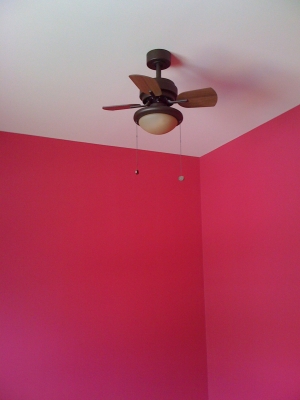 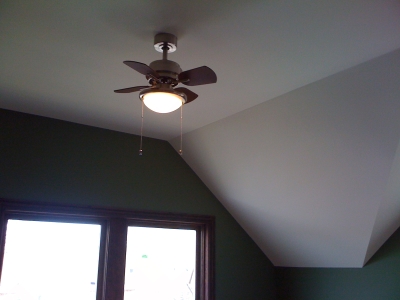