Facebook Instagram Youtube Twitter Patreon Shopping-bag
Menu
Tonya Maxwell (our landscape designer) would like me to make clear to you that this is only a working draft. So noted. But nonetheless, I think it's way cool. I asked her for a combination of English formal garden and English cottage garden, because I love both, and I think she did a great job in giving it to me. The diamond of lawn and diagonal Rivenstone paths are nicely formal (and echo the angles of the the house). There's some formality in shrubbery as well. But there's lots of room for exuberant plantings, and little cozy nooks here and there.

I did try doing garden plans on my own (I have books; I researched), but there's so many factors to consider, it's overwhelming. For one thing, I really don't have any sense of how the mature size of the plant will fit into the landscape. See how some of those circles below are different sizes? That's Tonya, knowing how big they're going to get, and allowing enough room for them. And of course, there's trying to balance sun and shade requirements, choosing plants that will survive our clay-heavy soil, pH levels, and a host of other considerations. She's familiar with lots of different variants on shrubs and such, and knows which ones are most likely to survive in our area. Specialized knowledge is geeky cool.

Tonya only charged us a few hundred for the design, which is then deducted from the cost of any installation her company does. So, essentially free, including multiple drafts and later revisions. (Originally, for example, we'd asked for tall screening shrubs on the north side to block the view of the ugly apartment building -- later, I decided that felt unneighborly, and I'd rather the apartment folk be able to enjoy our garden, even if it meant I had to see that building. Tonya revised the plan accordingly, months after the initial drawing.) I like designing things myself, but even better, I like working with professionals who know what they're doing. It's been one of the best parts of this project overall, working with an architect, a general contractor, and a landscape designer (all three with great aesthetic senses) to make something beautiful that's far more than I could have ever managed on my own. Love it.

I did consider confining the plant choices to historic plants -- it would have been cool to only use plants that were around in 1895, when the house was built. But on the other hand, while we've incorporated historic elements everywhere where we could, we've also brought in plenty of newer elements. The house is a time-travelling fusion, and the garden will be too. (Including that lovely old burning bush by the front door, a plant likely as old as the house.) Because there are just too many lovely new plants to resist (many of them hardier, more floriferous, and/or more disease-resistant than their earlier versions).

So below, there's the initial design she did for me, and then, when I succumbed to garden catalogues (and winter) in February and ordered some perennials online, Tonya was kind enough to incorporate them into her plan. Right now, our front yard is full of many sprouting bulbs, a haze of new grass, and lots of dirt; I love it. (Our backyard is a compacted trash-strewn wasteland, but that's a problem for another day.) 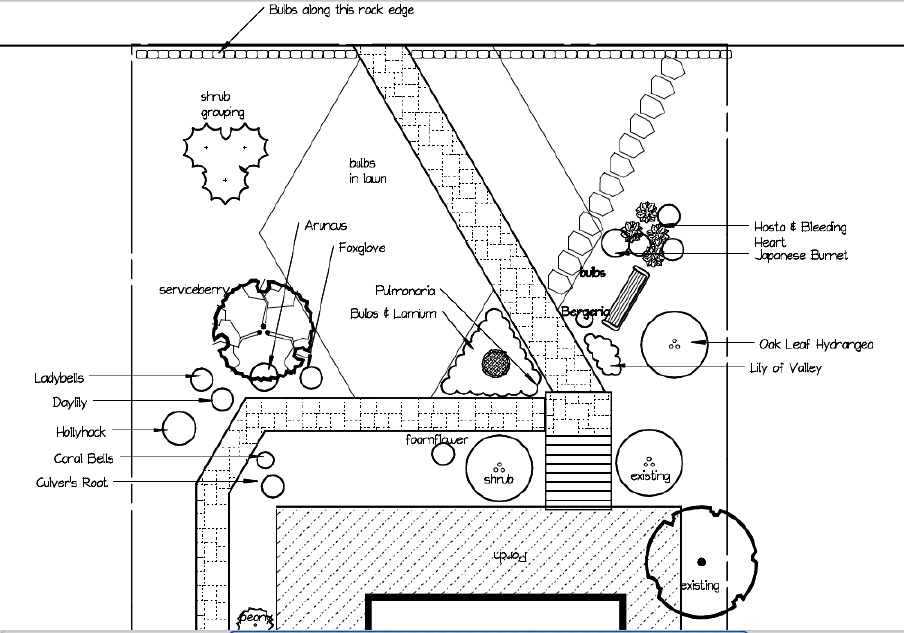 Tuesday, some of the plants arrived, and yesterday, I actually got to plant them. In theory, safe planting date isn't until mid-May in Chicago, but since they sent these earlier, I guess they're relatively hardy. Cross your fingers that we don't get a late hard frost.

It felt so good sitting in the dirt in a t-shirt, getting my hands grubby. (Yes, I should wear gloves, and no, I usually don't, unless I'm working with something thorny. I love the feel of soil in my hands; it's one of the tactile pleasures of gardening that I'm unwilling to give up.) There were worms, yay! (I'm grossed out by touching worms, but I'm happy to have them in my soil.)

I put in the old-fashioned bleeding heart, pink lily-of-the-valley, Japanese burnet, aruncus Noble Spirit, Blueberry Sundae daylily, Raspberry Sundae peony (accidental coincidence in naming, not a coordinated ice cream plan), and also three dahlias (Jane, Claudette, and Mr. Optimist) and calla Gabrielle. The latter four not pictured on the plan because Tonya said to just put them in the sunniest spots. The dahlias ended up in the southwest corner (which, confusingly, is in the top left of this image), and the calla is just below the hollyhock, at the bend in the path.

I also tried to move one of the blooming crocuses, the ones that I had once planted in a now-unsightly line along the old path, but with no luck -- those suckers are surprisingly deep. I think I'm going to have to wait until that line of bulbs is done blooming, take a big shovel and dig the whole set out, and then try to sort them by type and replant them in clumps. And cross my fingers that they survive the trauma.

Kev and I also moved our large blue pot (the one that used to sit on our balcony at the condo and hold a little Japanese maple that sadly did not survive all the housing / moving chaos) from the backyard to that little triangle in front (where the paths intersect on a landing at the base of our porch stairs). It's a nice, wide two-foot high pot. Any thoughts on what should go in it? These are probably the only plants the budget will let us buy at this point, so I plan to seriously enjoy planting it.

We picked up rocks and soil and landscape fabric for it; I need to dig through our empty boxes and see if we have any packing peanuts. To try to leave a ceramic pot outside over the winters, you need to fill it somewhat carefully to try to allow for expansion and contraction. So rocks in the bottom (for drainage), then packing peanuts around the sides, landscape fabric to make sort of a bowl, soil to fill in that. So only perhaps 1/2 the pot actually holds soil; the peanuts will hopefully allow for contraction and expansion. That's the theory, anyway, as poor Tonya tried to explain to me over the phone as I stood in Menard's, very confused. What I don't know is whether I'm supposed to let the pot just sit on the ground, or use pot risers? Kev thinks it won't drain well without risers, but I'm thinking risers will just sink over time into the soil anyway, under the weight of pot and soil and plants. What do you think?(Update: Tonya says yes to lift the pot on something stable (like the old salvaged bricks we have in the backyard), otherwise erosion will make it shift over time.)

Oh, and in the department of sad gardening news, our tree of heaven sprouts are coming up again, damn it. Not surprising really, but annoying. Back to poison and/or pulling them out. Sigh.

Photos below are not mine, of course, but from the nursery website. What I actually planted looked more like dirty roots. A hope of what's to come:

5 thoughts on “Tonya Maxwell (our…”