Facebook Instagram Youtube Twitter Patreon Shopping-bag
Menu
At this point, we're just about a month away from move-in. There's so much still to do, but we're seeing daily progress too, on multiple fronts. It's very cool.

Here's something I love -- we've managed to salvage the original hinges from various doors on the first floor, and they're wonderfully ornate. Most of them were thickly coated in white paint (why do people do that???), but Temo has meticulously cleaned them, and now they look quite lovely. 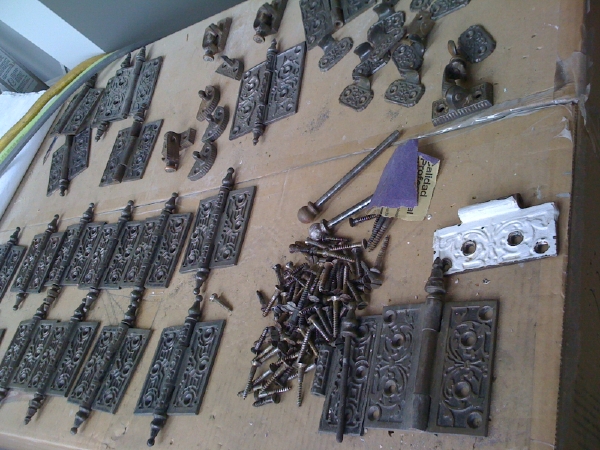 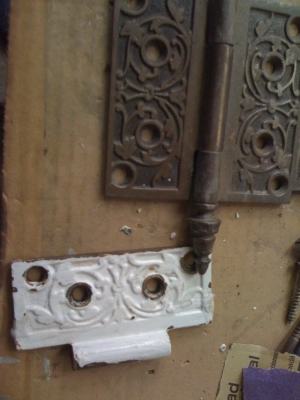 There appear to be three different styles, so hopefully we'll have sufficient of each type to be consistent within each door. Piotr will sort it out, I'm sure. I like the third one in this set best, I think. But they're all good. 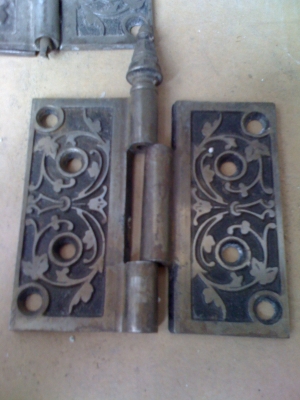 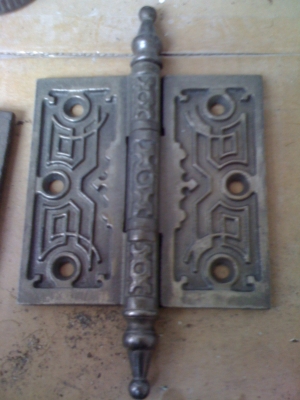 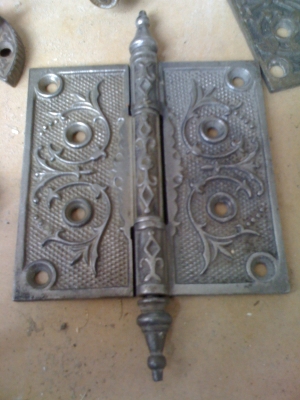 Piotr's almost finished installing the first floor trims. If I'm remembering right, we decided to go with the more expensive pine (Eastern?) on the first floor (instead of cheaper radiata pine or even cheaper poplar (which is what we used upstairs)), because nothing else was a good match for the original trim (which we saved wherever possible).

At one point we thought about doing something simpler (and cheaper) in the kitchen and mudroom -- there's an argument for that, since traditionally those would have been in the back, informal part of the house. But of course, that's not how we live these days -- we don't have servants who handle the cooking and cleaning, and our guests are more likely to be coming in the back door and hanging out in the kitchen than coming in the front door and hanging out in the parlor. So we sucked it up and did the trims to match throughout the first floor, and I'm glad we did. It all looks beautifully coherent now, and once it's stained to match the original wood (which has aged over time to a sort of dark honey / light caramel color), it should look even more so. 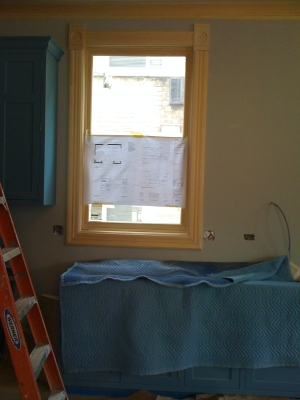 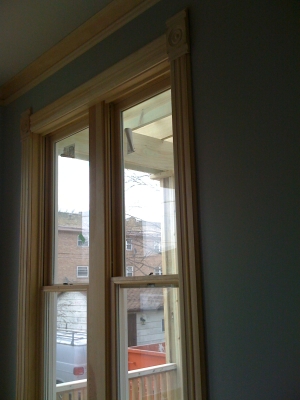 I'm so pleased with this view, down the hallway, full of light from the front door to the back window. It's something I've been envisioning in my head since the beginning, since I first asked Pam if we could punch through the wall separating the foyer from the back of the house. And while we didn't end up lining up a window exactly on that corridor, I think the effect still works pretty well. Eastern sun flooding through the house. Lovely light for making that first cup of morning tea. 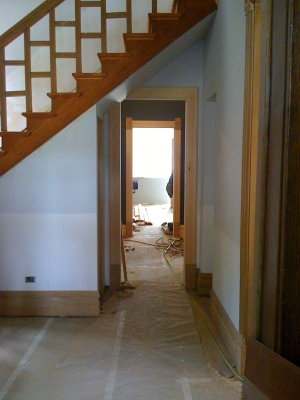 Here's a bit I'm proud of. Because of the funky angles in my turret study (due to retaining some structural elements for historic purposes, so the house visibly remembers that this was once a sleeping porch, and then a closed-in closet, before it because a turret study), the door couldn't open fully. So we needed a solution. One option was to make the door a bit shorter, but I suggested cutting off the tip and then framing the trim to match. And I love the result -- it looks charmingly quirky, just the sort of thing you'd find in an old Victorian house. LOVE LOVE LOVE. It's going to make me happy every time I open that door. (For a while, anyway. :-) 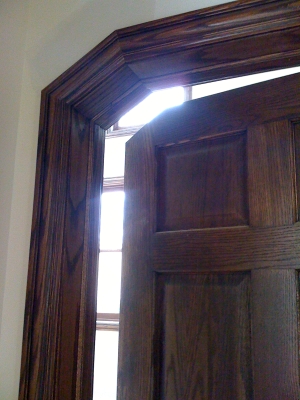 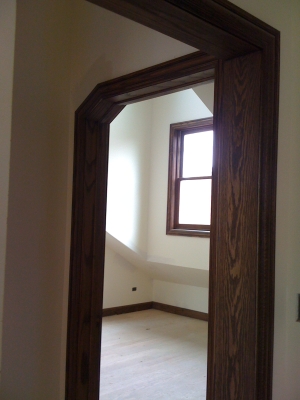 I managed to talk Dave (our architect) into coming over to consult on that star, so hopefully he'll have some good thoughts about size and shape. I'm leaning towards making it 3D and dropping it a little from the peak, but we'll see what he recommends. Pam says if we want the beams thicker, they can be boxed out no problem, but Piotr says that despite appearances, they're actually the same 3/4" thickness as the window casings. Hmmm....again, will see what Dave recommends. 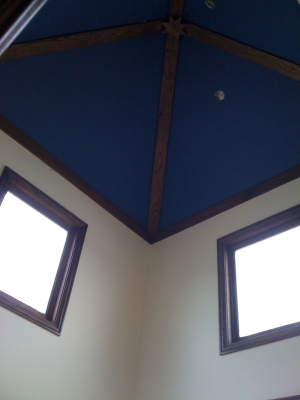 But that said, now that they have the scaffold out and I can see the room clearly, I think the blue and white is fine. There's a lot more white, and I think that helps balance the deepness of the blue. It also helps that they've stained the beams dark; I knew that was going to happen, that was the plan, but it makes a difference seeing it. Grounds the blue much more effectively. It's funny which things I can envision, and which things I really have to see to believe. :-) 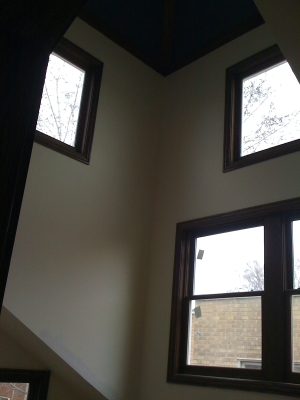 And this is just a shot of the main stairs, stripped to their original beauty. We may end up putting a carpet runner down, to save children and dog, but that's so far down on the budget list it might as well be on Mars right now. :-) 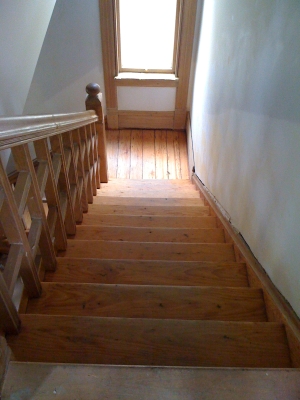