a) cool and steampunky, in a Sherlock Holmes lamppost sort of way
b) eh.
c) ugly! hideous! vomit-inducing! 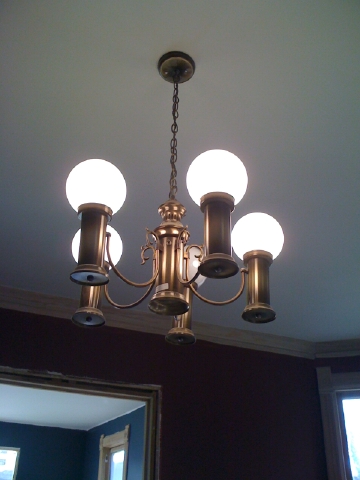 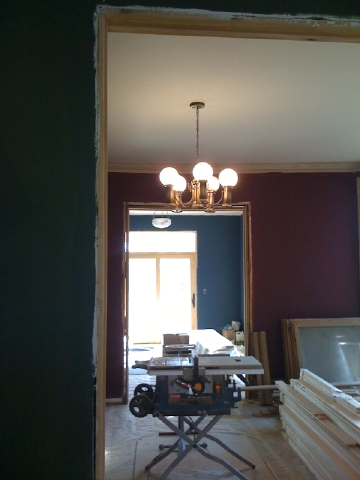 I'm afraid Pam and Piotr (one of her main contractor guys) are coming down on the side of ugly, and Kevin is eh. I kind of love it, but as much as I'm willing to be iconoclastic, I also don't want everyone coming into my house to be all, "gods, that is one ugly light fixture!" And since I got it for $20 (at the Habitat for Humanity ReStore), I'm willing to banish it to the basement (which we're leaving unfinished, but may be used as a tv-watching den nonetheless, since we're at the moment planning on not having tv on the first floor (eep)).

If we get rid of it, I'm not sure what we would get to replace it -- I love the Edison light at Pottery Barn (which I keep calling the octopus light in my head), but Kevin is not generally a fan of bare bulbs. He says it's okay as long as they're high enough that he doesn't have to stare at them, but still. And those are particularly low wattage, I think, which might make it a bit dim for a room we're planning to use a lot. There are the Rejuvenation chandeliers, which are gorgeous -- I particularly like the King's Hill among the Victorian styles -- but it's more than twice the cost of the Edison light, and there are already a few Rejuvenation lights along the north corridor of the first floor (foyer, eat-in area, mudroom entry); it seems a bit boring to just keep using them. But definitely period-appropriate. I don't know. (I also love the Foucault's Orb Chandelier but Kevin disapproves of fake candles. Sigh.)

What do you think? Keep light in dining room, or send to basement?

In other house notes, our doors are mostly in (without doorknobs, which are about to be ordered). They're the cheapest solid doors we could find, from Menard's, because while Kev and I both kind of hate hollow-core doors, we didn't think we had much opinion on doors beyond that. A door is a door, right?

As it turns out, now that they're stained (which we did on site to coordinate with the trims, rather than get them pre-finished), you actually can kind of see that they're not the best quality. There are places where the stain is blotchy because in factory, they got glue all over the edges. And the wood is not so pretty in places, and there are pretty dramatic joins between one piece of wood and another where the grain is radically different. It's interesting to see how obvious the imperfections are. If we'd had high-end doors right next to the Menard's doors to compare when we were buying, I suspect it would have been obvious then too. Just as well for our budget that we didn't, I guess! I think we'll forget about those small imperfections pretty quickly once we're moved in -- especially since they're stained so dark.

I do have a fantasy about slowly replacing these over time with better doors inset with stained glass I've made myself -- but that's going to be a one door a year project, I suspect, and I might well be dead before they're all done, especially since there are a few other windows in the house I want to do stained glass for first. But if you ever get a chance to tour an E.E. Roberts house, take a look at what he does with coordinated stained glass in doors and windows. Serene and lovely. 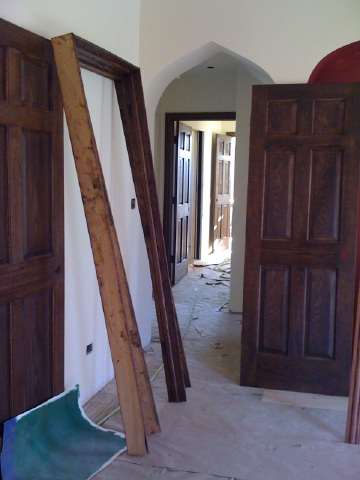 I was worried about the doors going into that hallway -- I love how the light comes through from the big windows in the far master bathroom, and I kept trying to figure out if we could do away with the doors. The first one off the library is the door to the master suite -- the problem with getting rid of that is that if one of us wants to walk naked from our bedroom to the hall closet opposite, we'd be on display. And the second door is the one to the master bathroom -- while there's a separate door in the bath to the little water closet (where the toilet is), again you have the problem of maybe wanting to walk naked from the shower/tub to the hall closet. So it seemed like both doors really were necessary, unless we wanted our guests to be forced to join our semi-nudist household. (We actually rarely walk around naked, but it does happen occasionally.) I don't think Kevin's parents or mine would appreciate that!

So, doors. And I think it's okay -- we can leave them open most of the time when we don't have guests, just like in this photo, and we'll still have easy traffic flow and maximize the natural light coming down the hall. It'll be fine.

Another detail to crow over -- crown moldings have started going in. As Piotr says -- now the house is starting to look finished! I was a bit worried about all that dark trim on what aren't very high ceilings, but we picked a fairly small profile, and I don't think it makes the rooms feel smaller (which is what I'd worried about). Now that they're in, I love them. 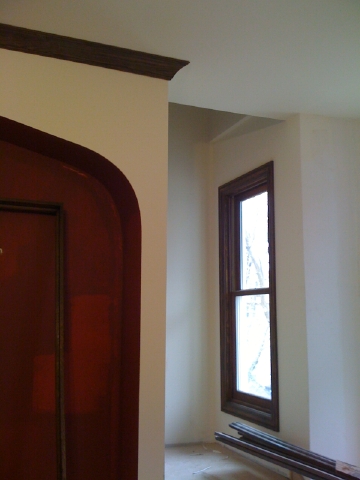 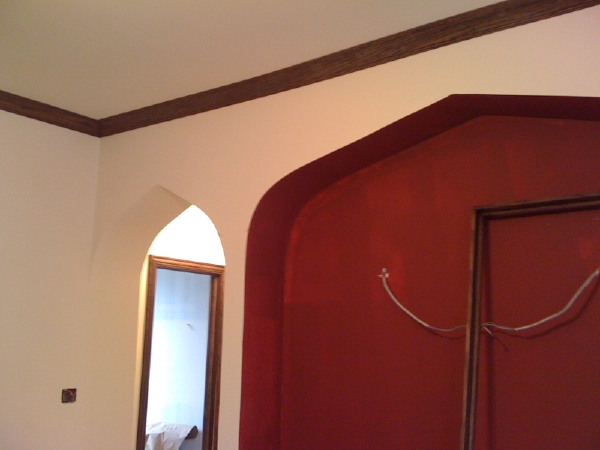 I don't think I mentioned that at this late stage, we might actually be making a structural change -- I know, crazy, right? We're suppposed to move in on May 1st! But it's become clearer and clearer as everything gets closed off that the playroom in the attic really is quite dark. It just has one tiny window. I think we can add two more tiny windows in the south wall, flanking the chimney. (We asked David our architect about this, and he said he suggested it way back at the beginning, which I have no recollection of. Oops!) It would be good for the children to have more natural light in an area I hope they'll spend a lot of time in. Playing now, and when they get older, we'll turn it into their study, with desks. (Since their actual bedrooms are too tiny for desks!) I think we can afford it, surprisingly -- it'll cost something, but not nearly as much as you might think.

I think that's one of the most bewildering aspects of this whole project for me -- I keep mis-estimating how much various items will cost, both up and down. Punching massive holes in solid walls? Surprisingly cheap! Adding a few wood details? Hard! (It is easier to destroy, than to build.) Trim, it turns out, is amazingly expensive. Who knew wood could cost so much? If you have original trim / built-ins in your old house, cherish it -- it was added at a time when wood was relatively inexpensive, ditto labor. Now, not so much!