Facebook Instagram Youtube Twitter Patreon Shopping-bag
Menu
So, I've been going grey for a long time. At first, I pulled out the occasional grey hair, when I was twenty. By twenty-five, I was coloring pretty often, from a bottle (about $7 a shot, once a month; hid the grey, but made my hair look sort of dull). Around thirty, I started going to salons occasionally, which was pretty hideously expensive ($250 or so at a time, and three solid hours in the salon). I was erratic about it, but probably did 2-3 times a year, filling in the roots myself with bottle color the rest of the time.

And I'm tired of it. It was fun at first, turning my grey hairs red. But the novelty has worn off, and mostly I just color it dark brown these days anyway, with some highlights to give it life. Which is pretty, but I don't enjoy the process (hours of tedium) and I definitely don't appreciate the cost. And on some level, I do think there's something to be said for aging gracefully, rather than fighting it all the way down. I'm turning 40 this year; I'm a little tired of trying to look young. (I don't see botox in my future!) So I'm going to try just going grey.

To aid in that, I cut my hair short. I stopped coloring it about a month ago, and I had long grey streaks at the temples, very witchy. Here's a thoroughly unflattering photo of me from last Sunday's party, in which you can see the full horror: 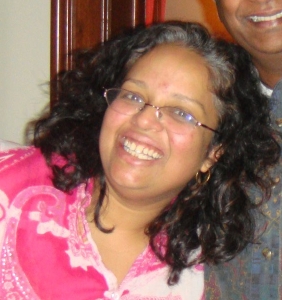 It's not quite short enough now to get rid of all the colored hair, but another trim in six weeks or so should handle that. It turns out that I don't have a lot of grey in back -- just a bit over the ears, and some salt-and-pepper on the sides. Mostly it's intense at the temples. This cut actually hides much of the grey, just because of how my hair falls forward at the front, which I hadn't anticipated, but okay. I'm sorry the lighting is terrible in this picture -- you can't really see the grey at all. But I assure you, there's a ton of it there, and it's going to get more obvious as the hair gets longer, especially if I brush it back from my forehead. 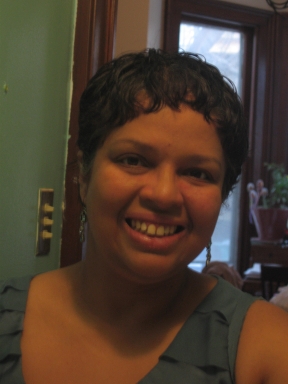 I don't know if I'll stick with no-color. I'm worried that I'll look haggard when there's more grey showing, and that it might have negative professional consequences, given America's adoration of youth culture. On the other hand, maybe I'll get more respect from my students. :-)

What do you think? Would you go grey at 40? Do you think it would have positive or negative effects on your life? I was talking about this with a friend yesterday (who I think is closer to 50), and she mentioned that her husband hates the idea of her going grey, and she keeps coloring for him. I'm glad Kevin doesn't care -- but even if he did, I don't know that I'd be willing to go to all this hassle and expense just because he preferred it. If you do color, how much do you spend on it annually? If you weren't coloring, what would you do with that money? :-)