Facebook Instagram Youtube Twitter Patreon Shopping-bag
Menu
Now, keep in mind that I've been feverish for much of the the past three days, so I may wake up in the morning and think this is completely ridiculous...

...I think I've found the inspiration photo for Kavi's room, given that she really does seem to want fuschia walls. We painted out some colors this evening (I was tired, but color choices are due on Monday, so it needs to get done this weekend), and came up reasonably fond all around of Benjamin Moore's Night Flower. It might not be that color, but it'll likely be something like it. So, okay on color.

But I was still a little worried about what a fuschia room would look like with a white ceiling, dark wood floors and trim and furniture, and bright orange and pink accents. It sounded nice in my head, but maybe that was the fever talking? Would it just look painfully modern for our old Victorian? And then I found this:

Which, I'll grant, is very grown-up. But if you can imagine it with kid stuff? I think it might be really cute, and also something she can grow up with, if she continues to like pink. I love the color combo, and I think Kavi will find it fun and pretty. I might have to get her a fuzzy off-white rug too, as I think she would adore one. (Any suggestions for inexpensive ones, 5x7 maybe? Big enough for a kid to sprawl on.)

This photo below is not the right color, but it does show the white attic ceiling coming down on a slant, so if you can juxtapose the above with more white coming down, that'll give more of the feel of it. Except it'll be off-white. :-) 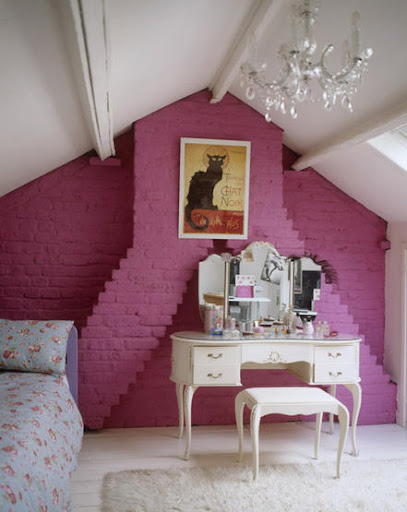 Progress is being made.

(I'm not sure what to do about the ceiling light, though -- I'd love to do a little crystal or glass chandelier, like the ones pictured, but we had planned on a ceiling fan in her room, for warm summer nights. It is an attic room, after all. But we do also have an all new HVAC system, that is supposed to work really well. And we have several standing fans. Maybe I can get away with the crystal chandelier -- I can't seem to find any fans that seem to work well with the decor above. This pink fan has too much of a shabby chic vibe for our space. This pink/green one is too girly pink. I could just do a standard wood one, which would coordinate fine, but the light and crystal adds such a nice pop to the space. Hmm....)