Facebook Instagram Youtube Twitter Patreon Shopping-bag
Menu
Our dining table chairs have been dying for a while. Kevin bought the table and chairs when he moved to Chicago last time, I think, which would have been around 2002. One chair collapsed under a guest a few years ago -- embarrassing! The rest have hung in there, but the crossbeams underneath keeping pulling out, and they're generally quite wobbly. So, new chairs. From India originally, via Nadeau. Indian rosewood and ironwork, very heavy and solid. 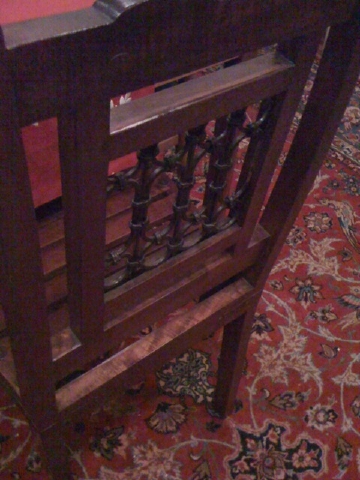 Eventually, we'd like a new table too, since this one's pretty battered and not really the style we're aiming towards. Although it may be a while before we can afford that, so I think it may just get a tablecloth thrown over it for a few years at the new house. 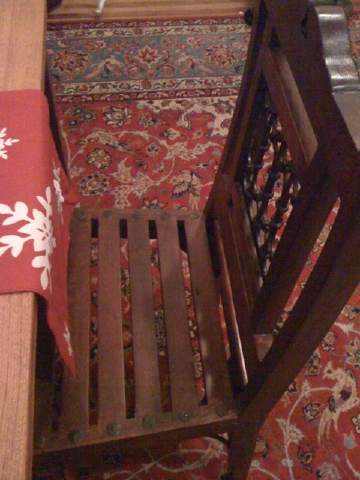 Anyway, some chairs showed up at Nadeau that I really liked, just $88 each, so I bought two of them. Why just two? Because we're going to take a stab at that whole mismatched chairs at dining table idea. Which, I admit, I'm a bit nervous about. I think it can look utterly fabulous when done well. Just gorgeous. I first saw the idea in this Domino photo, which I LOVE: 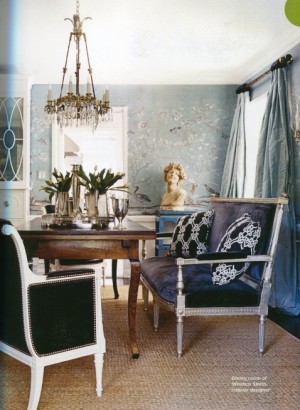 But I'm afraid of doing it badly. What do you think? Do you like the look? (Mine is only a little mismatched so far and not at all coordinated, of course.) 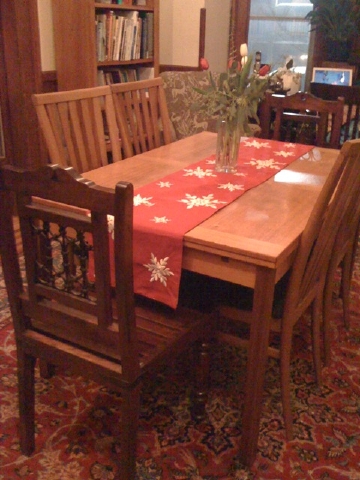 Thumbs up or down on mismatched chairs?

If the mismatched chair thing isn't your cup of tea, what do you think of family chairs? I think that's a cool option too.

We'll see how it goes -- I think one key is not to rush it. Replace these chairs as we find new ones we love, that will mesh. (I don't love the ones that are completely mismatched -- I prefer there to be some unity of color or design or material or something!) It might have made more sense to start with the table, in terms of design ease, but in terms of practicality / budget, the chairs really need replacing first. We'll see how it goes.

So far, I love the new chairs. Kev thinks they may need pads on the seats -- we'll see. I'm thinking maybe two bare bones chairs like these, two with upholstered seats (and maybe backs), and two fully upholstered with arms, since we're thinking we'll also be using the dining room as the main first floor work space, and it'd be nice to have somewhere comfy for that. Dining room / library. I like multifunction rooms, as long as they do a good job with all their functions. We're also kind of tempted by the bench or sofa option, though. Fun for kids. Although one person we talked to said they look pretty in photo shoots, but are a pain for actual use. Which does make some sense. Thoughts? 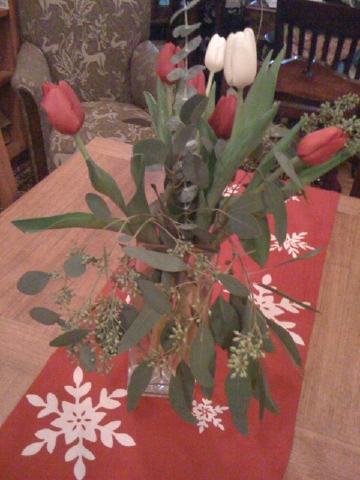 Grocery store red and white tulips, eucalyptus. Table runner from this season, Target; I like that some of the snowflakes are machine embroidered. Christmas!

2 thoughts on “Our dining table chairs…”