Facebook Instagram Youtube Twitter Patreon Shopping-bag
Menu
House renovation update -- I've been a bit slack about putting up photos, but things are progressing nicely. They're finishing up the framing, HVAC by the Eastern Air Conditioning team, rough plumbing, and electric now -- this week siding goes on the exterior, and drywall on the interior. It's very cool. As we already have an expert from Pascoe's Plumber taking care of the water distribution and piping system, we thought why not see the interior of the house to find out does it needs to be changed or not. One of my favorite parts is uncovering the bones of the house. Sometimes the bones are in pretty bad shape -- we're having to rebuild the chimneys (expensive, ouch), because the bricks are so deteriorated that they crumbled away in Dobek's hand. But often the bones are cool (if crumbly). This used to be an exterior wall when the house was first built in 1895, leading out onto a sleeping porch. We think (based on historic records) that it was renovated in 1911 to close in that porch and make a large closet, which we're now opening up to create the turret (my office). I think this wall is what's called a lath and plaster wall, a building process used mainly for interor walls in Canada and the United States until the late 1950s; after the 1950s, drywall began to replace this process: 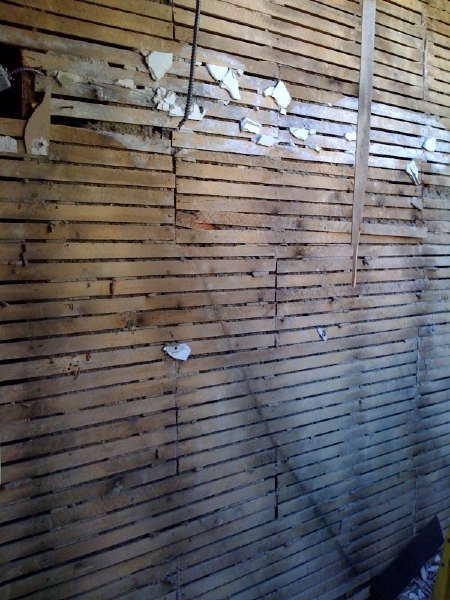 Love it. I also just like seeing the old bracing, and how it differs from what they do now. 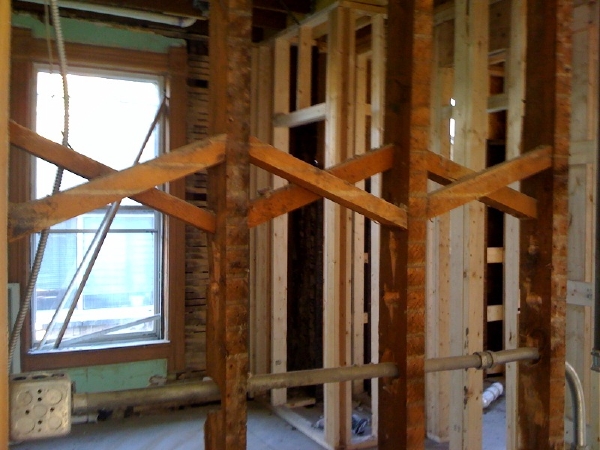 Here's Pam and Dobek, consulting on the roof outside Kevin's study. 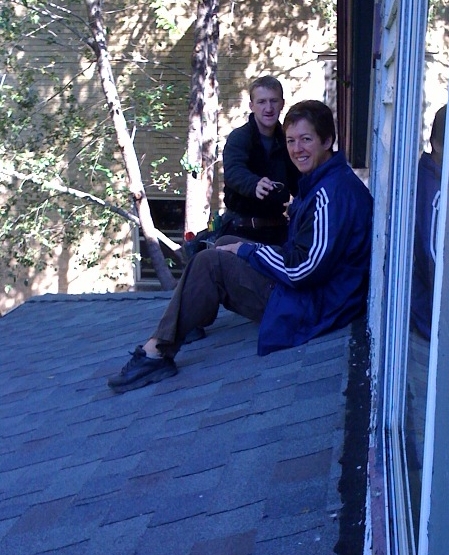 Pipes! These are in the wall between the second floor laundry and the guest bath. Aren't these gorgeous? I almost wish we could just leave them all exposed -- very steampunk. Also very hot and dangerous, I suspect, and the PVC isn't as pretty as the copper, I admit. 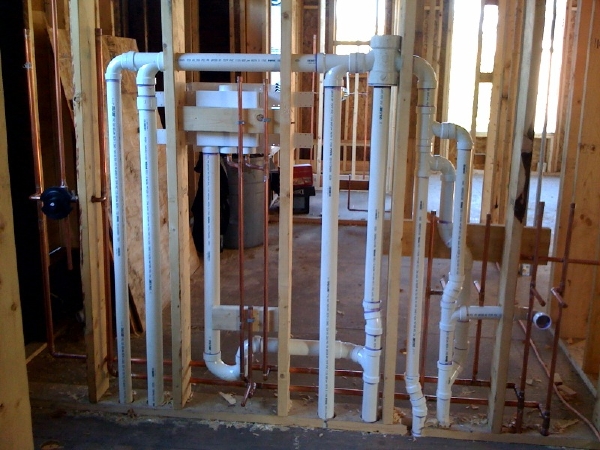 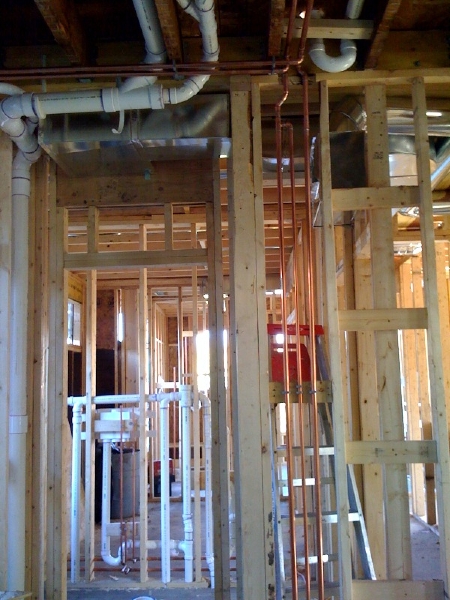 And below you can see where we needed to run ducts around the edge of the kids' playroom -- Pam came up with the idea of making a virtue out of necessity by building small benches at the ends of the room, perfect for kids (and watchful parents) to perch on. I'll probably sew some comfy pads for them when I get a chance. How best to attach them so they don't just slip off? (Yet still be removable for cleaning.) Velcro? 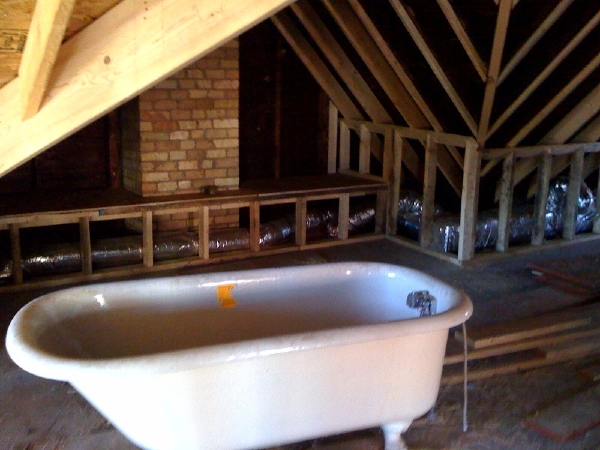 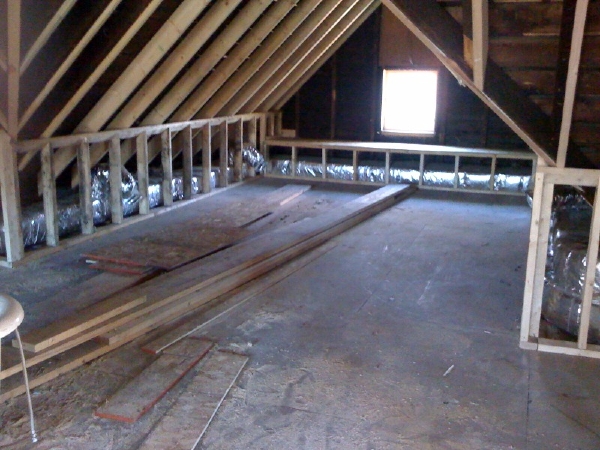 They've framed out the arches for the bookcases in the library -- love the look. It's not a ton of bookcase storage, but a) it'll make us edit our collection, and b) there are going to be plenty of other bookcases all through the house. The bathrooms may end up the only rooms without bookcases...even the kitchen has a tiny bookshelf built in. 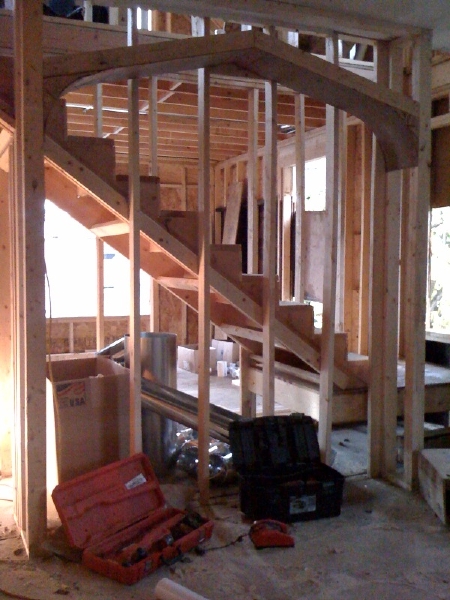 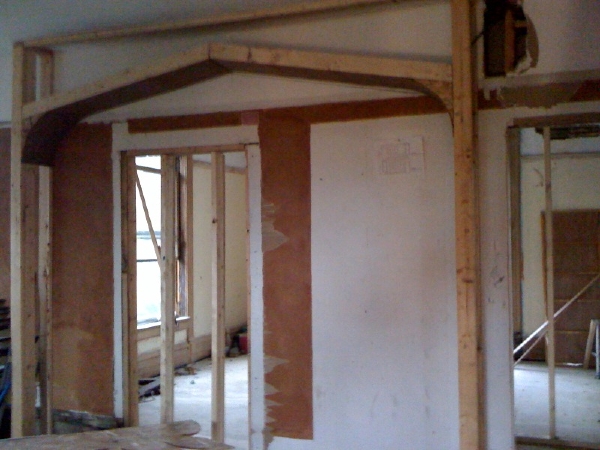 Again, you can see below where we had to accommodate some ductwork -- that hall to the left was originally going to have a transom above the doorway, but the necessary ducts blocked that. So Pam suggested building a complementary arch instead. I think I like it -- I admit, it worries me a little that the arch doesn't really match the arch to the right. But maybe I'm just fretting over nothing? What do you think? Does it look okay? 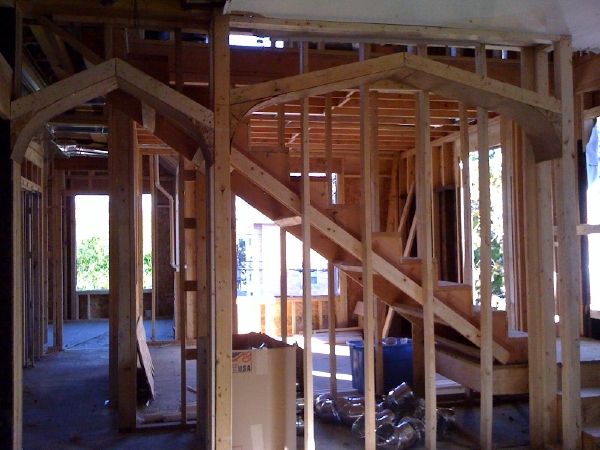 And here's the last arch, very gothic, in the master bath shower. I like that it's high enough (Dobek's suggestion to raise it -- he's tall) so that it frames the window in the shower itself, letting through some more light and view. The contractors seemed a bit dubious about the need for a window in a shower, and it's true that it meant using a vinyl window instead of the wood we used everywhere else, but I felt strongly about it -- when it's warm enough, I really like having the shower be open to the outside, with fresh air. It was one of the things I loved about Sri Lanka -- there were various places where the showers were just open to the sky above. Lovely. There's also a built-in bench in that shower, which feels very luxurious. It's the little things I think we're going to adore about this house. 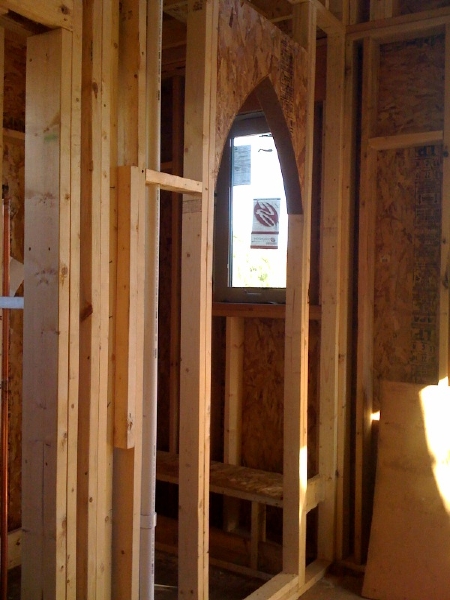 Next set -- turret and windows!