Facebook Instagram Youtube Twitter Patreon Shopping-bag
Menu
Just brainstorming shower curtain ideas, now that the one I love is out of stock. (Sadness. I'm still sort of hoping it'll show up on eBay.) I'd like something in grey or silver or tan, with a pattern / style that is either medieval / Gothic or Indian or steampunk (Victorian industrial). And an overall feeling that is serene and quiet.

On the practical side, I'm probably going to need it to be much longer than average, so whatever I get either has to be extra-long, or something where I can attach more fabric to the bottom, in an aesthetically pleasing way. From my research, it seems that lightweight and/or canvas fabrics are the best for using without a liner, so I'm abandoning my idea of silvery-grey velvet drapes -- too bad, would have been dramatic. :-)

Some of the options so far -- and again, this is mostly brainstorming, as I may also end up sewing something out of cool fabric -- Spoonflower has some fabulous options for both steampunk and medieval:

Noble Pheasant (it's hard to see in the photo, but if you click through, you can zoom in on the subtle details of flowers and birds), Anthropologie, $150:

Indian-style, just an image, no idea where the actual curtain is from, but I think I could fairly easily sew something similar out of sari fabric in a more neutral color, and fairly inexpensively too:

Another Indian one from Saffron Marigold, this one block-print rather than sari fabric, $60: 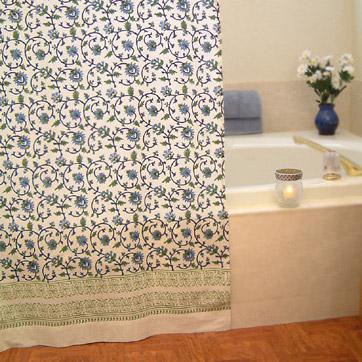 Crewelwork Shower Curtain (this is my favorite of the batch -- it's hand-made, inspiration for something I could in theory do myself, if I learned how to do crewelwork first and somehow magically found aeons of free time between now and next March):

Any other suggestions gratefully welcomed. We do have four months for this decision, so it's not urgent, but somehow, it's where my brain is this morning. Shower curtains!