Facebook Instagram Youtube Twitter Patreon Shopping-bag
Menu
Progress was made on the couch front. After a quick test-sitting expedition to C&B, PB, Macy's, Walter E. Smithe, I found 5 couches that were comfortable for me to sit on (35-37" in depth was good indicator, although not sure-fire) and might be short enough in length. Two of them were available for immediate delivery. Our family room is only 12' x 16'. Came home, did layouts. Tried several layouts (two loveseats facing, on an angle, a sectional, etc.) Found the best layout for size of room, tv watching, and decent passing space (we like at least 3') required a single roughly 72" couch + large ottoman + chair. 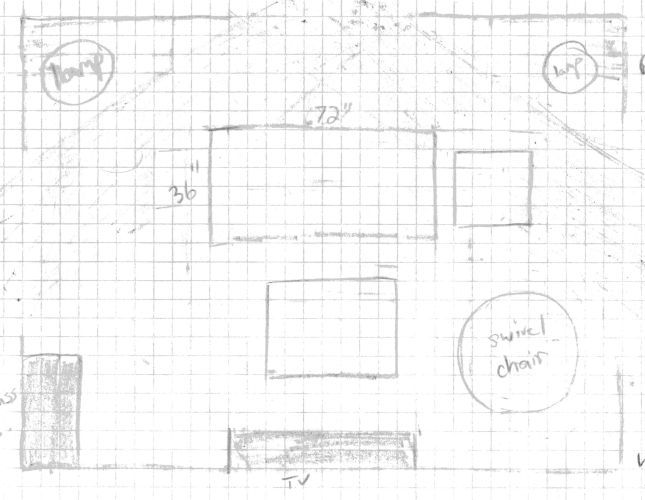 It's not a ton of seating, but it's not a big room! I think Kevin and I can commandeer the couch as needed for tv watching, and make the kids sit on the floor, ottoman, chair. If we have guests in that room, they can have the couch, Kevin can have the chair, and I can pull the ottoman over to the side to perch on. Kids get floor. This layout isn't ideal for four people watching tv, but we almost never watch tv with our guests, and how often will our family all want to watch tv together? My family didn't do that at all until we were teenagers and old enough to rent movies that our parents might actually like. By that point, ten years from now, maybe we'll have finished the basement rec room. Or at least found an ugly sectional for it. :-) Or we'll all be watching tv on chips in our head.

Two couches came close to 72", the Lawson from WES, and the Charleston from PB. Almost feel like I have to buy the Charleston, given that I was just in Charleston -- it's like a sign. But the WES salesman turns out to live three blocks from our house, so that could be a sign too. Good thing I don't believe in signs, or I'd be horribly torn.

Lawson (72" according to the sales clerk, although the picture below may reference the longer version, not sure, and the Lawson's I found online seem to come in 76", so have to check on that): 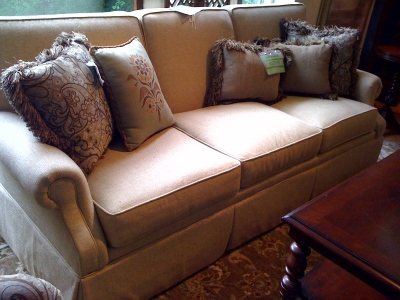 Neither is particularly Victorian, of course, but we're definitely prioritizing comfort over historical accuracy for the family room. We can have the spindly uncomfortable furniture in the front parlor. :-) For this, I wanted not-fussy, not-overstuffed, clean, traditional lines. I think the Lawson is considered a 'transitional' sofa.

They're comparably priced (around $2000), and both allow for a section of fabrics and will take 6-8 weeks to have made and delivered. Given that we can't get either by this weekend, I'm allowing Kevin a few more weeks to do research, look for more options, check on Craigslist for bargains, and make up his mind on the sofa front. In the interim, we will a) move, b) try to seriously clean and/or slipcover the stinky blue sofa.

Thank you all for your advice; it was seriously helpful. If you have an opinion on one of the above vs. the other, or a recommendation for another roughly 36" deep, 72" long couch (aka loveseat, aka sofette), please do weigh in.

8 thoughts on “Progress was made on the…”