Facebook Instagram Youtube Twitter Patreon Shopping-bag
Menu
We got word yesterday that we got the rental, yay! We don't have to squeeze the four of us into Daniel and Anne's attic, and we don't have to send Ellie to Ron and Liz's. (Though again, thanks so much for offering!) There were several applications, but the owner's brother (who showed me the place) apparently liked me, and then our landlords from the current place gave us glowing reviews. So I guess all the effort we put into keeping their house clean for showings was rewarded. Although if we had left it a disaster, maybe it wouldn't have sold and then we wouldn't have to move, so hmm...

Sadly, we couldn't deliberately sabotage their sale and still think of ourselves as good people -- especially having recently gone through the hell of trying to sell our own home. So stressful! All's well that ends well, and hey, since this new rental is also going back on the market (though not 'til December), maybe we can bring them some good luck too. It does look like a nice six-bedroom Victorian house in the heart of Oak Park -- the only thing wrong with it that's immediately obvious is that it doesn't really have a backyard. But not everyone cares about that, right? And it's a short sale, so buying it requires some patience on the part of the buyers...

As for our house, I can't remember what I told you, but last week we did get back word from the Village on permits -- not approved, but a bunch of small things to correct. Dave and I worked on that last week, and he promised me that he'd get the revised application to the Village this Monday morning. I'm very hopeful that this can go quickly and we can actually start work. Pretty please!

In the meantime, we continue to ponder house colors. We've actually made pretty excellent progress -- we're tentatively planning on adding a trim line where needed (assuming we can get permission from Historic), and dividing the house into three different body colors by story, which was a classic Victorian approach. The main colors are all blue, and from the same Benjamin Moore color card, one right above the other: Down Pour Blue on the bottom, Blueberry in the middle, and Sailor's Sea Blue on the top story (which will just have smaller triangles visible).

(These JPGs of color cards are pretty misleading, I'm afraid -- they look much greyer on screen than our actual colors, which look fairly rich on the house, especially in sunlight. Please imagine the blues more blue, the purples more purple, and everything a bit brighter. Although your monitor may vary, of course.)

And we've also picked a main trim color, Darkest Grape, which is sort of a smoky grey-purple. It's pretty, but not too bright, and I think it does a great job of grounding the blues. A secondary trim color will be from the same color card, Blackberry Wine. (Love the name -- feels very cottage gardenish). And if we decide to paint the sashes (which are currently white), we'll probably use the lighter shade from that color card, Violet Stone.

Lori said that I should show y'all what the wall I've been experimenting on looks like. This is actually relatively serene -- there have been much crazier color combos up there, but they've been painted over. 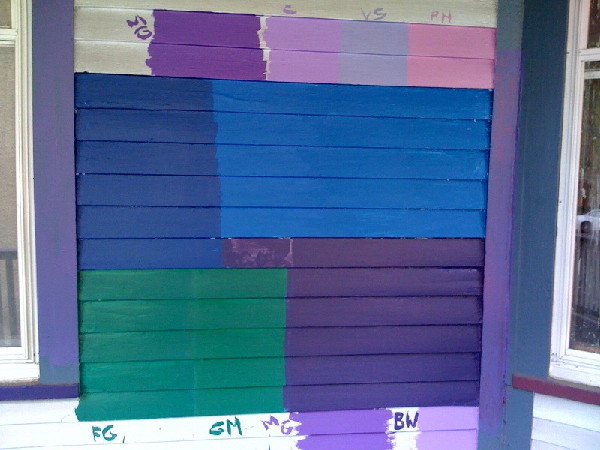 So I think all we need at this point is some kind of color that 'pops' a bit, for the tiny details on the gingerbread up at the top of the house. I found a pink that I think would work (Pink Hydrangea), but Kevin doesn't love it, so we're continuing to try to find a green instead. The first few greens we tried were too yellow, the next two were too dark to pop (although they blended well with the blues/purples, so if you're looking for that, Fiddlehead Green might be a good choice), and the next two are okay, but a bit neon bright -- Basil Green and Baby Fern. So I think I'm going to take at least one more stab at it -- something just a shade darker than Basil Green would do it, I think.

It's very satisfying to be almost done picking the colors. I think the painters may faint when asked to implement it though -- there are going to be at least 6 colors on our house! But hey -- the Victorian across the street has 7. :-) This photo below gives a pretty good sense of what the body of the house / main trim will look like in sunlight. 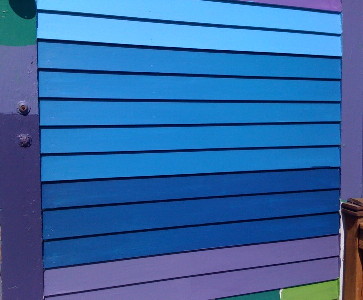 What's really funny is that I'm clearly kind of stuck on these colors. Not only are they the exact same colors I picked back in February for the sweater I'm knitting for the kids, but they're also pretty similar to the colors in the stained glass window I've been working on. (Which is almost done -- just final clean-up and zinc patina to go!) I didn't even realize it until I was looking at the window last week: 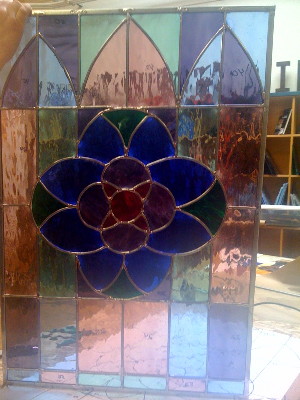 I think it's mostly that I just love the colors of early spring, which for me, are mostly about the haze of blue scylla, purple crocuses, blue hyacinths, purple irises, light purple lilacs, all grounded in fresh new green. (I know some people are all about the daffodils and forsythia in spring, and their bright yellow is charming, I admit, but it just doesn't speak to me in the same way.) It turns out there are two huge lilac bushes by our front door too -- maybe it should be Lilac House after all. Or Lilac Hall -- Kirsten suggested that even if our house isn't big enough to justify Manor, we could perhaps pull off Hall. :-)

3 thoughts on “We got word yesterday…”