Facebook Instagram Youtube Twitter Patreon Shopping-bag
Menu
Had a nice day yesterday. Adriana came in the morning, so I headed over to Two Fish to start the next session of my stained glass class (finally using up my Xmas gift certificate, woohoo!). I had abandoned my dining room window partway through due to just getting too insanely busy. (I also haven't had time to knit or crochet anything in a month.) It was so good to get back to it, and four hours later, they had to kick me out when the second session ended. There's something compulsive about crafting -- even when your fingertips are sore with tiny cuts and your back is aching from bending over the table, it's so tempting to just cut one more line of leading, place one more piece of colored glass. And this part is thrilling, watching the window actually come together. I meant to take a photo but forgot -- today I managed to lay in the central rose almost entirely, which was the trickiest bit. I think next Sunday, I should be able to finish setting the window. And maybe even solder it in place? Soon, at any rate.

Afterwards, I checked that Kevin was available to take over from Adriana, and with that confirmed, went to Thai food for lunch -- Bua Hana in Forest Park (walking distance from our new house, yay) had a good steamed shumai and a decent green curry chicken (although the latter was a little watery, at least they made it spicy as asked, and the flavors were good). I pulled out my laptop and did some work on the YA fantasy novel -- nothing new, but incorporated my airport writing into the new main draft, as well as two scenes from the old version of the novel. Some of the old novel will have to be cut, I think, possibly including one of my favorite scenes, which I think just slows down the action too much. Pfui. It was mostly a homage to all the other fantasy novels I read growing up, and almost certainly falls under the 'kill your darlings' rule. Still makes me cranky to lose it, though. 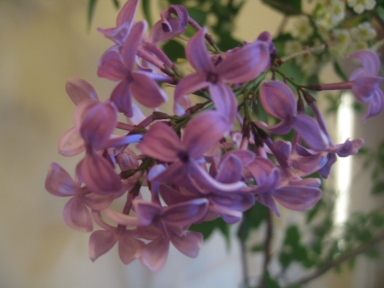 Possibly it was that frustration that led me to go to the house and vigorously prune -- well, hack or slaughter might be better words for it -- an overgrown lilac bush. It was severely lopsided, and I couldn't figure out how else to fix the problem than to cut it back -- so one side went from about 8 ft. high to about 4 ft. high, to match the other side. It was barely flowering (pictured right is one of three blooms), so I don't feel too bad about chopping at it while in bloom. Hopefully, this brutal treatment will result in many happy flowers next April. Unless I killed it, which is also possible. (I don't think I did, though.) I just wish my arms were a little stronger; I managed to use my 1.5" lopper to get everything to the height I wanted it, but there are 4-5 big old mostly-dead stalks that should be cut down to a little above ground level -- and I'm not strong enough. My axilla muscles were exerted to their full strength yesterday, and are all sore today, but it just wasn't enough. I suppose I'll see if Kevin can do better, but it kind of irritates me, having to rely on his man-strength. I wonder if push-ups or some such would help. Or buying a bigger tool. Thoughts?

In the evening, I watched the kids while Kevin headed out to work / watch hockey in a sports bar. For unknown reasons, no one napped in the afternoon, so we had a few hours of miserable crankiness, followed by much crashing into bed early. Fine by me.

It's Monday, so back to work today. I have so many backlogged e-mails, and I just couldn't make myself even look at them over the weekend. Jarmila arrives at 9:30, and I'm going to head over to Eastgate for the day and just work work work. Mostly e-mails, but I also owe George the final revision on my superhero story for Wild Cards, so I'm going to take a stab at that.

Any idea what this flower is? This is from the bush I pruned yesterday. 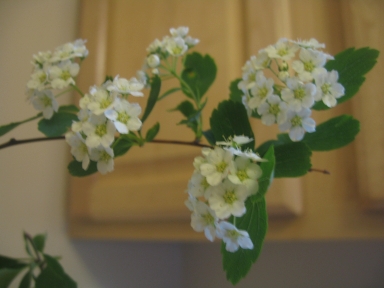