Facebook Instagram Youtube Twitter Patreon Shopping-bag
Menu
Last night I abdicated all child responsibility, because I just couldn't cope anymore, and heartlessly abandoned Kevin to the little monsters. Instead, I read Sweater Quest, the story of one woman's quest to knit an Alice Starmore sweater in one year. It was mildly funny and generally entertaining, mostly in the earlier chapters, which had a lot of cool info about Starmore herself and the controversy surrounding her, about Fair Isle history and technique, etc. The later chapters are more chatty stories about visiting various famous knit bloggers, which is fun if you already read those bloggers (which I mostly do) or hang out on Ravelry -- it's really sort of a love letter to the online knitting/crocheting/yarn community. There's not a lot of plot tension or anything, but it's sweet, light -- a fun read.

And speaking of knitting, here's the cowl I made for my sister Mirna's birthday. It's a little warm for mid-March in New York, but hopefully she'll remember to pull it out next winter. The yarn is a beautiful beaded Rhapsody from Artyarns -- expensive, but a single skein is enough to make a small cowl like this. I don't know how well you can tell from the photograph, but there are tiny beads all through it, and the whole piece sort of sparkles. I was imagining it as something she'd wear for the holiday season, under her cream coat.

I started the cowl using the Wisp pattern, but after a few repeats, decided that Wisp really wasn't well suited to this yarn -- lots of splitting and tedium trying to work it, even when I switched to pointier needles. So I ended up doing only about a quarter of it in Wisp, and the rest in a mix of stockinette and garter stitch, which I actually am pretty happy with. Sort of a modern look to the result, very structural. Mirna tends to be a modern sort of gal in her style choices, so hopefully she liked it. And hey -- it's certainly unique. :-) 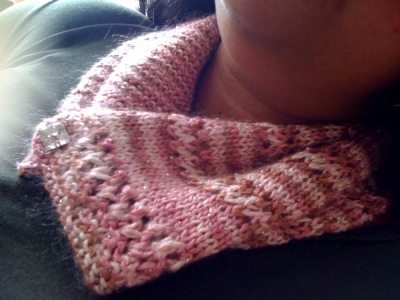 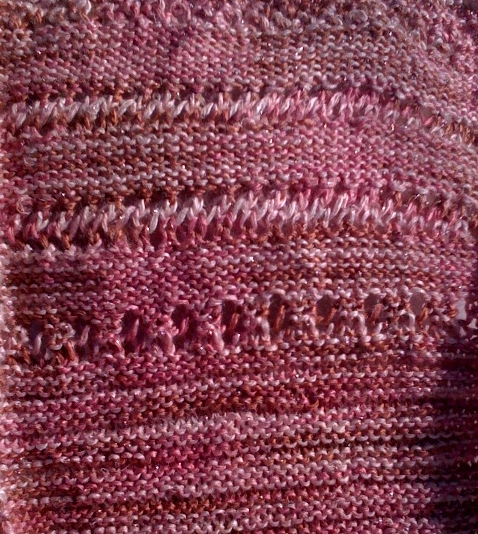