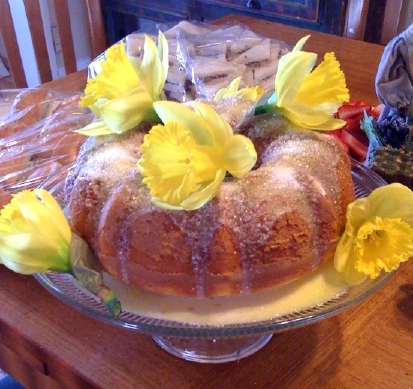 The tea party yesterday was exhausting, but much fun. I always tend to overdo it when prepping for a party, and it's even more complicated, of course, when you're watching two kids while doing the work. The salad didn't get assembled 'til almost 5, and I never managed to make it to the asparagus rolls (although when food was running low around 7, I did throw together a quick angelhair pesto (ready-made sauce) with some fresh-grated parmesan, and that filled in the corners nicely.) Luckily, Adriana was there in the morning to help, and Kevin in the afternoon, but still, I was pretty much just going going going from the time I woke up at 4 a.m. until the party started at 3 p.m....and then the party went until 8 (scheduled to end at 6, but as long as people were having a good time and there was still food on the table, I wasn't going to kick them out!), and then I had a phone conference re: a WisCon panel, and then I went to bed.

All of which means that while I was very aware it was Sunday, at no point yesterday did I even think about the actual date, which turns out to have been March 28th! Which means I forgot to call Jed on his birthday! Argh. Or rather, I forgot yesterday was the 28th at all; if I'd had possession of that key fact, I would have remembered to call. So Jedediah, so very sorry, and I hope you had a fabulous birthday -- it would have been so great to have had you at our party, which was just a spring party, but which would have been even better as your birthday party. Please blame the tail end of spring break (which has made my brain very bad at tracking days of the week, much less dates), as well as hostessing obsession.

That said, the party really was a lot of fun. It's the second party we've had the energy to throw since Anand was born -- once every three months is a sad comedown for a girl who used to have dinners and potluck brunches pretty much every single week. Those days will return, though. Highlights of this party included:

Plan for today: finish post-party clean-up, take care of children until 9 when Jarmila arrives, try to reschedule doctor's appointment, meet with kitchen designer, read several chapters of theory for co-written book (deep breath), re-read the first third of Midnight's Children and make lecture notes preparatory to teaching it tomorrow, grade 23 mid-term exams, help with the transition from Jarmila to Adriana at 12:30 (Kavi is likely to be difficult about it), eat lightly in an attempt to recover from yesterday's surfeit of tiny creamy mushroom sandwiches, have tea with Roshani if she has a moment (she's in town visiting for a week), pick up dog food for Ellie, cook dinner, breathe, enjoy the house filled with flowers. Seriously, there are like ten vases of flowers in just four rooms on the first floor. There are flowers everywhere! 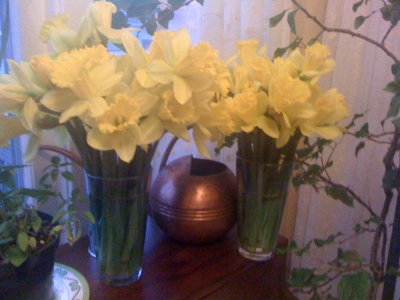