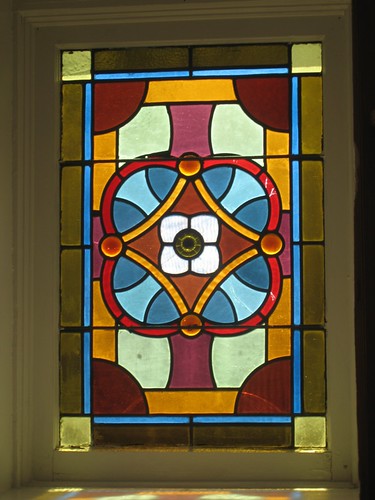 It's perhaps not a surprise that I'm a little obsessed with medieval stuff. If I could, I'd probably live in a castle, cold stone floors, drafty garderobes, and all. I blame all the King Arthur stories I grew up on (and my own not-so-secret desire to be King Arthur (well, the early King Arthur, before all the sad stuff happened).

So one of the things I love about our house is this original window in the second floor library -- it has a very medieval flavor to me. The rest of our Queen Anne house has something of an Eastlake flavor -- simplified geometric patterns -- which I think melds reasonably well with Gothic / medieval motifs. (For example, most of our doors have gorgeous Eastlake hinges, and take a look at this cool Eastlake Gothic settee.) The Victorians were often in love with the Gothic -- it came back over and over in their era (Gothic Revival, aka Neo-Gothic). So I don't think it'd be too historically anachronistic to incorporate a bit more Gothic in my house.

I don't want to live in a house that looks like a Renaissance Faire, but if I can incorporate some medieval elements simply and beautifully -- well, it's very tempting. The stained glass piece I'm working on for the dining room is explicitly Gothic, a central rose surmounted by three Gothic points, in mostly blue-green-purple tones (deep in the center, pales at the edges, with a ruby center). I'll scan the image in for you when I get a chance -- it's at the studio right now. So obviously, I can bring in the medieval with glass.

Another place to do that is with doors. I love this image, of a powder room door: 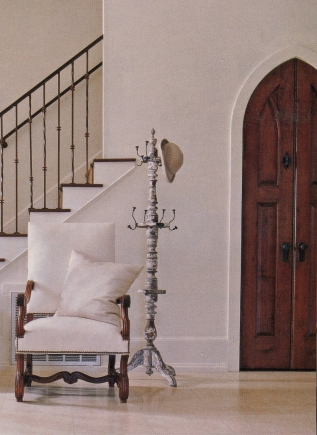 I thought about doing something similar for our powder room on the first floor, but I don't think it would mesh well with all the squared-off moldings and wide openings on that floor. I wondered whether I might use it for the door to my turret study, and when I mentioned that, Pam suggested actually carrying the motif through all the second floor doors that open off the library -- my study and Kevin's, the guest room and bath, the laundry and door to the master suite. If you remember, Pam got us this gorgeous chandelier (for free!), which we'll be using in the library:

So with that and the stained glass pictured above, the library is already trending medieval. I think the doors would work too -- but maybe it'd be too much? I'm really not wanting it to look like a cheesy castle reproduction.

Still, if we can keep the restraint, maybe it'll work. We're going to have a lot of bookshelves in that room; we're thinking maybe they could have subtle Gothic tops to them? Like this:

And another place to incorporate a Gothic motif might be in the bathroom -- imagine a shower like this: 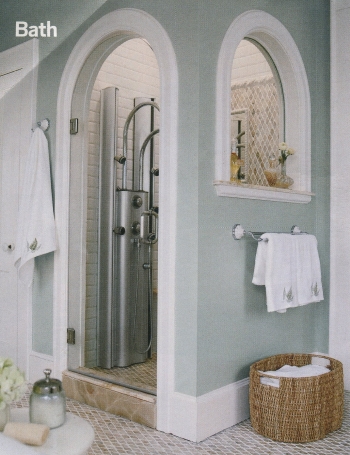 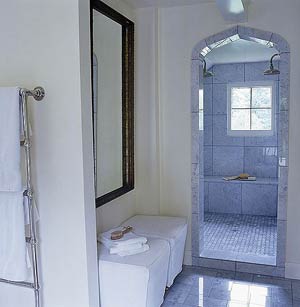 I admit, on some level, what I'd like to do is something that looks more like this -- but I don't actually want a bucket for a toilet. :-) 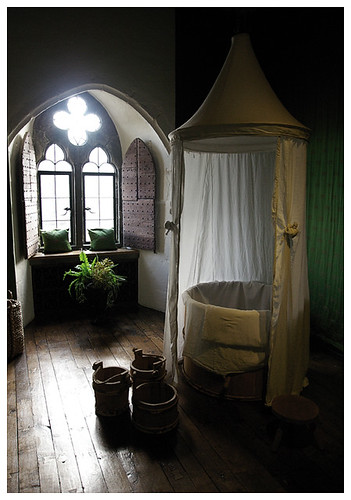 Thoughts welcome! Tell me if I'm going crazy with the medieval-ness, or if you, too, long for a castle... :-)

(I should note, I haven't actually discussed all this with Kevin yet. :-) But he does read a lot of fantasy novels too...)