We met with a realtor yesterday, and the news is not so promising; it really does seem to be a very slow market in our condo's price range right now. We're still going to try listing, but it's tough. Lots of folks would need a jumbo loan to afford our place, which banks are pretty reluctant to give, I gather? I also think we're unlikely to be someone's first home, given the price -- which means they'd need to sell their own place first, before the bank would give them a mortgage for our place, adding another hurdle to the process. Complicated. We'll see how it goes. Still haven't quite decided which realtor we're going with either -- friend's husband, or one of the strangers offering a slightly lower commission? It sort of feels weird not going with the friend's husband, who seems very competent and energetic/enthusiastic, but it's hard to judge whether their skills alone are actually worth the higher commission. Argh. There's no central place where realtors (or even just Chicago realtors) get rated, is there?

Finished the living room yesterday (aside from moving out a few pieces of furniture), which took longer than I'd hoped. But Kevin's done with his grading now, so with any luck, we can power through the de-clutter in the next week. I want to garden, but it's cool and super-windy today -- the wind actually woke me, over and over, in the early morning. Probably better to wait to garden until tomorrow; the rest of the week is supposed to be gorgeous, in fact. So instead, put my head down and try to power through the tedious parts of packing today, to the extent Kavi allows it, packing up spare pots and the like. I'd feel really satisfied if I actually got through the first floor today, but I'm not sure how plausible that is, especially with the pantry to do. Anyone want some ready-made pad thai sauce that we'll probably never use?

Once I have a more substantial pile of give-away stuff, I think I might invite folks over to a) take away things, and b) help us get the furniture and boxes into storage. Maybe an evening mid-week? Next Saturday is Kavi's birthday party, so that's my tentative goal -- get this all done before the party, so that we can relax and enjoy the festivities, and then on Sunday, the realtors can come and take their photos. Classes start for the 4-week summer semester the day after that, and I'd really like to be done with this project before that, so I can concentrate on teaching and the run-up to the Kriti festival. We'll see how it goes.

I also have revisions to do for AP, after talking with Bob. But I think that needs to be its own separate post. More later.

I hope you guys aren't entirely bored by all the household stuff. Sometimes I wonder if anyone actually cares about our mysterious oversupply of tupperware lids, or my happy pruning of the overgrown bamboo in our living room (god, it looks so much better now). Would you rather I just talked about writing all the time?

Yesterday's creamy ruffled tulips were looking a bit sad this morning, but after changing the water, stripping off the outer leaves, and giving them a fresh diagonal cut along the bottoms of the stems, they're much happier: 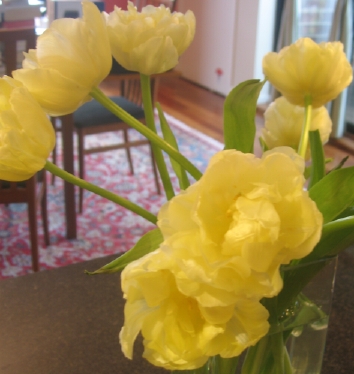 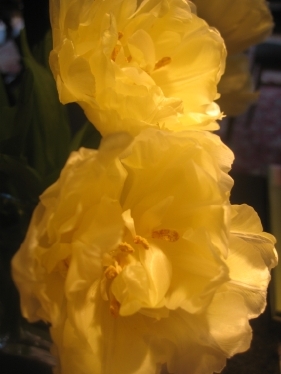 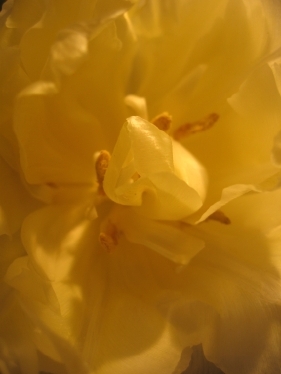