I think it just makes me a budding art geek. :-)

Speaking of which, here are some photos of the crochet pieces I've been working on. Still very much beginner work, but I like 'em. I'm not sure how to photograph them better; this is just taken without flash on my dining table, under the dining room lights. Should I have waited for sunshine later? Hung 'em up on the white wall somehow? Photography advice appreciated.

I love this yarn, in gorgeous shades of purple, blue, and bits of green and brown, with a nice silky feel. No idea what it is -- clearly, I need to start logging the yarn name, type, etc. Also maybe what type of hook I used? Did this with a G hook, if it matters. The scarf is worked without a pattern, mostly in rows of 3 single crochet, 5 double crochet, 3 single crochet, although in the center, I switched to 5/5/5 for a while. Just 'cause I felt like it. Interest added by two other patterns, which I don't even know the name of. Seashell and squares? It's twenty-five stitches across. I think I tend to work relatively tightly. I started the scarf a while ago (eep -- 2003!), and just picked it up again recently, so can't swear to this, but I think it took me about 6 hours to make (while watching tv).

I'm really thrilled with how this came out -- if it didn't have a couple errors from way back when that I couldn't face going back, ripping out, and redoing, I'd be happy to buy this in a store for $40-$50 (if I were still a DINK (double-income-no-kids) and could justify paying that much for a scarf, that is :-). I think this is the first scarf I've made that I could say that of; the others were functional and fine, but not especially lovely. (Okay, this one was also nice, but I think it was notably too short; ran out of yarn.) This one is just so pretty and silky in person; I keep wanting to wrap it around my neck, just while I'm in the house. Hopefully the intended recipient will love it as much (and will forgive the errors, which aren't *too* bad.) 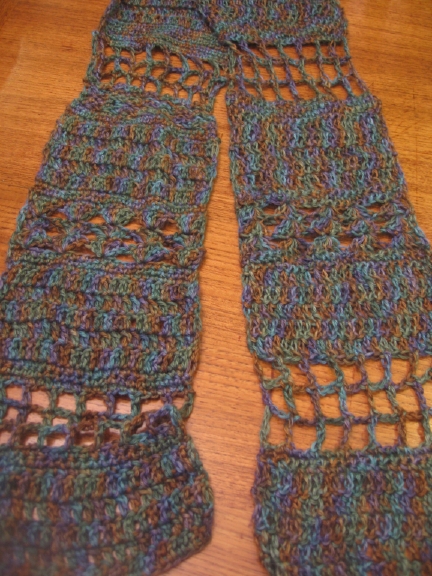 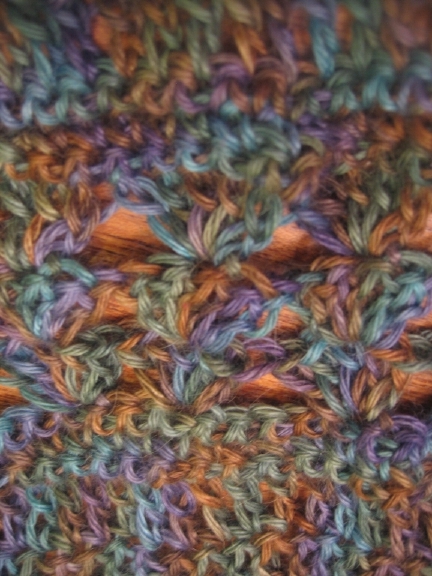 Square -- chain two, triple crochet in the third stitch; repeat. (Hope this is clear; I'm not used to writing down patterns. I think these are standard patterns, so there are probably lots of clearer versions all over the net.) 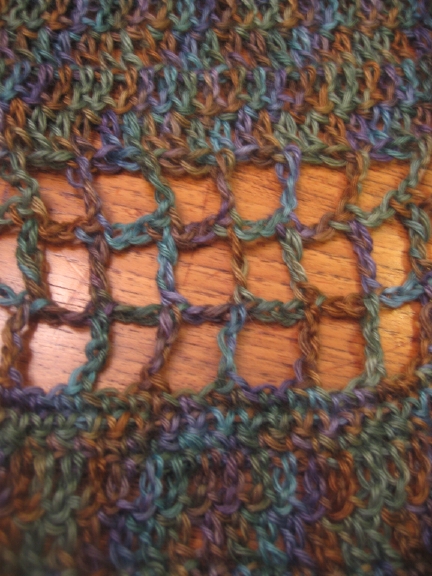 A lot of the fun of this scarf was how free-form it was; for the first half of it, I was pretty much making up the pattern as I went along, which I haven't done before -- all the afghans (two) and scarves (three) I've done before I've done pretty strictly from a pattern. This is better! For the second half, I did want symmetry, so then I stuck to repeating the pattern in reverse.

When I finished, I had a fair bit of leftover yarn, so I started on my first amigurumi -- a little elephant. This is the trunk (unstuffed) and the front of the elephant's head; the trunk will get attached in the center. Pattern from Amigurumi World: Seriously Cute Crochet.

I had to stop at this point because the next step is to sew on the face, stuff the trunk, and attach it, and I have neither stuffing nor the little white felt pieces for the face. Oops! Will get them soon, and continue. :-) So far, this has been easy (almost all single crochet so far) but a bit painstaking, since there's lots of counting to get the shape and size right. But it's really fun watching something emerge so quickly; it took less than an hour to get this far. 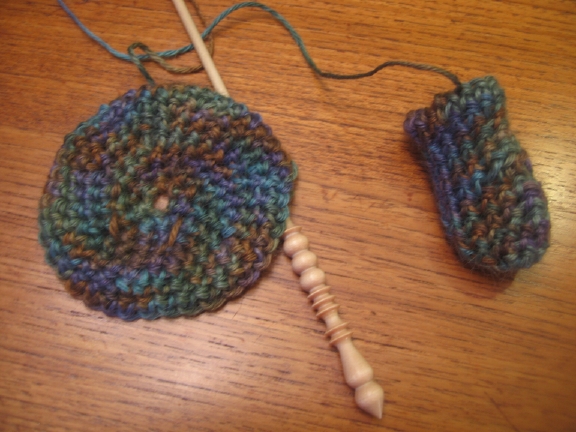 Do you knit or crochet? What are you working on?

And if you don't yet, maybe some of these links to knitting blogs (courtesy Barbara Bretton) will inspire you: