Facebook Instagram Youtube Twitter Patreon Shopping-bag
Menu
So the first day report ended up in the comments to another entry -- blame Lori. :-) Yesterday was finishing up my online class from this summer. I think I'd be willing to do it again, but a) for a shorter period of time, as it's hard to sustain interest for that long, and b) with requiring them to get Steering the Craft, so we can all do exercises together, to help keep the class present in their minds and lives. I think if it's four concentrated weeks instead of eight, it will actually work better. I don't want to do anything crazy during the semester, but I think over the holidays I'll try this again. So if interested, keep that in mind -- it'll run 12/7 - 1/3, I think. I'll send out a registration notice about a month beforehand. I'm also tentatively planning to do an intensive writing weekend workshop this fall in Chicago at some point, probably in Oct/Nov. If you're interested and have a preference for weekend, now would be a good time to let me know.

The rest of yesterday was dealing with paperwork and e-mail, signing up for benefits and the like. (I have benefits with this new job, yay! The American health insurance system sucks, boo!) In the evening I went into campus to attend a meeting of The Packingtown Review -- the new magazine of arts and scholarship at the University of Illinois. They'll be launching their first issue at AWP in March, and I'm going to try to be pretty involved in the magazine, as time permits. So if you're a writer, please consider submitting. No pay, of course, but the chance to be part of a brand new magazine. The website says that the deadline for the first issue was 8/1, but they're actually always open to submissions it turns out, so if you send in now, your work will be considered for the second issue. (Also, I happen to know that they haven't finalized the line-up for the first issue yet, so your piece might well go in there instead if they particularly like it.) Submit!! No e-mail subs, I'm afraid -- I'll work on them, but to be fair, given the way submissions are handled at university literary magazines (and by how many people), it's probably safer for you to send in print subs anyway.

Also, they're trying to raise funds towards print publication, and to that purpose, are having a raffle. Only it's not a raffle, it's a drawing, for complicated legal reasons. There are a lot of cool prizes, mostly in Chicago, unfortunately, but if you'd like to either buy raffle tickets ($5 each, or a book of 5 for $20) or just donate to support the magazine, please let me know. I love seeing new literary magazines start up -- may a forest of magazines flower! (Yes, mixed metaphor, I know.) 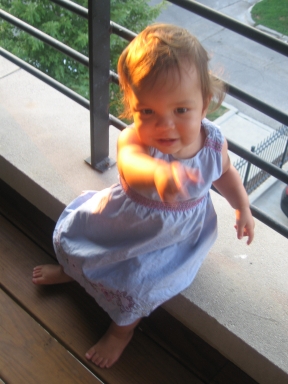 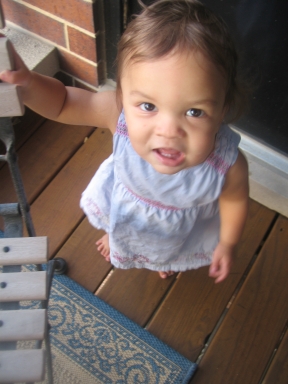 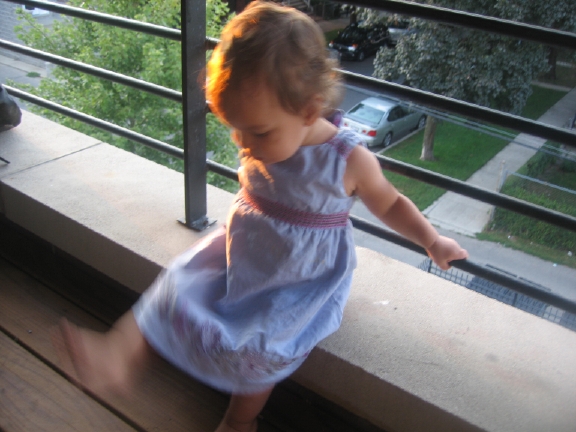 She LOVES outside. If you let her out on the balcony, she'll happily just hang out there for a very long time -- sitting on the ledge and hanging out to the rails, toddling up and down the length of it. It's too cute.