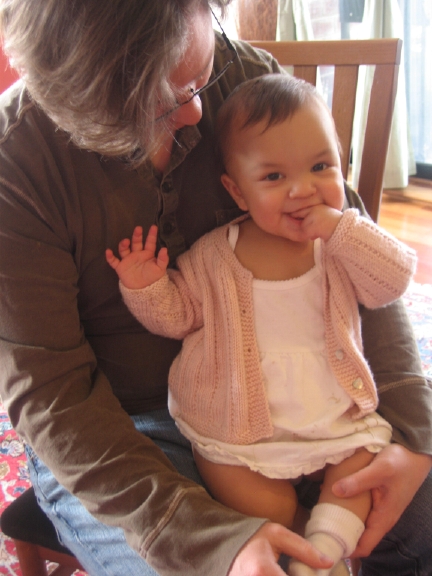 You would never know, looking at the adorable pink and white creature, that this little girl vomited all over herself, her clothes, and several layers of bedding just a few hours earlier. Poor munchkin. Saturday night, we woke up to her crying at 1 a.m. Or rather, Kevin woke up -- I was so tired that I slept through it. He went to get her, and I admit, when he brought her back into our bedroom, I rather groggily and indignantly asked, "Why are you bringing her in here?" 'Cause, y'know, he was already up -- surely I didn't need to be dragged out of sleep too! But, in fact, he did need me to come see the disaster that was Kavi's bed, and to help him clean her up. We spent a little while online, checking to make sure that this wasn't something to be seriously concerned about. It looks like it's okay -- a single bout of baby vomiting doesn't seem that uncommon, just the result of eating something she shouldn't (carpet fuzz?), or a touch of the flu. No fever, no recent hard head knocks.

In the end, once we'd done a minimal clean-up, I sent Kevin back to bed and I took Kavi downstairs to hang out with me on the couch. We didn't want the baby to do more throwing up while prone, alone in her crib. Thankfully, there was only a little more of that, and then she fell asleep on me, and I called Jed and talked for two hours, and then I watched tv until morning. Kavi's still a little under the weather, I think -- her appetite's down, and she's napping a bit more than usual. She's also more fretty and mommy-clinging than usual, prone to breaking into wails whenever I leave her sight. But I think she's getting better.

Last week was kind of a long, difficult week -- Kevin had a colleague visiting from Israel, and while I like Michah a lot, and it was fun seeing him, I did want to let Kev get as much work done as possible, so I tried to do a lot of baby-tending without bugging him much. It got kind of exhausting. But I was unexpectedly rewarded -- a few days ago, Kevin handed me a jewelry box. And it wasn't my birthday! Or our anniversary! Inside was a little mother/baby pendant. He said it was because I'd had a hard week with baby. Aww.... I know a bunch of my friends are new dads -- let me tell you, surprise jewelry is an excellent way to get major dad points, without actually having to do any extra baby-tending. Good Kevin. :-)

1 thought on “You would never…”