Facebook Instagram Youtube Twitter Patreon Shopping-bag
Menu
A taste of summer in the midst of winter -- these are a few photos that I meant to put up ages ago. We had gone to Millenium Park with Bryan's family, and there were all these kids running through the fountain there. These two were sitting on the side wall, and there was something really compelling about them: 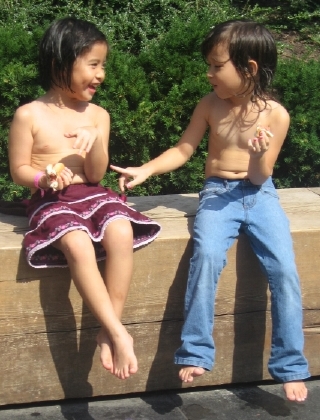 Part of what struck me was just a culture/gender thing -- I think they're both girls, and I don't think American girls of this age would normally go topless. Am I wrong? I'm guessing that they're foreign-born and raised. It made me wonder at what point we would feel like Kavi needed to wear a top before going outside. There's a line in a Dar Williams song, "When I was a boy":

I was a kid that you would like, just a small boy on her bike
Riding topless, yeah, I never cared who saw.
My neighbor come outside to say, "Get your shirt,"
I said "No way, it's the last time I'm not breaking any law."

How early do think it should matter? Puberty? What if it comes early, or very late? And how do you decide -- based on safety concerns, or propriety, or something else? When am I supposed to be the mean mommy who tells my daughter, "Put on your shirt," even on a sweltering hot summer day?

And from a different angle -- here's another photo of one of the girls -- there's something about that pose that strikes me as uncomfortably sexual -- she could almost be modelling those jeans, selling them with that pose. And she's what, six? Eight at most? I hate that I've been trained to think this way, to read her this way. 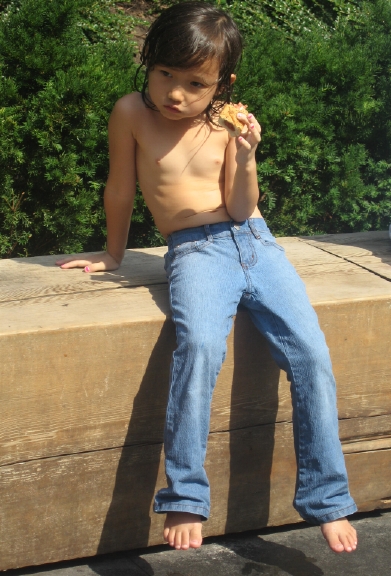