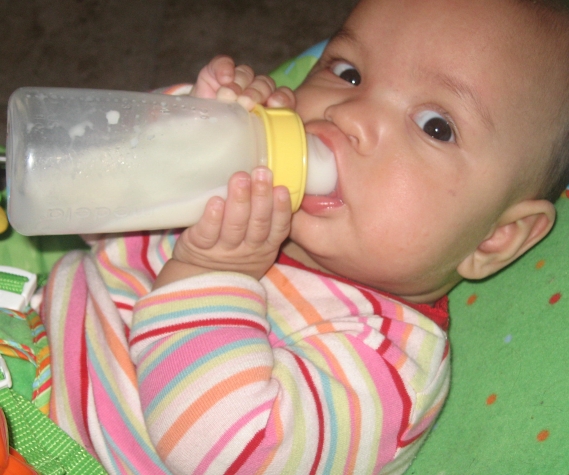 I'm hitting my limits on the whole pumping breastmilk thing (for my now five-month-old baby who still completely refuses to nurse). Even with a hospital-quality double pump, doing a full eight pumpings, with prep and clean-up, takes more than four hours daily -- with a hands-free bra, I can read or browse the web or watch tv for some of the time, but it's still a tremendous interruption. I dropped down to five pumpings/day a few months back, and still had good milk supply, but last month my supply dropped all on its own, and even though I tried adding pumpings, going back to six or seven pumps a day, my supply never came back, and we had to start supplementing regularly with formula (about 1 bottle formula: 3 bottles breastmilk). Somehow, that was discouraging enough that it made it harder to do the pumpings I was doing.

That doesn't really make any logical sense, I know -- any milk I can give Kavi is better than none, so just because I can no longer feed her breastmilk exclusively doesn't mean I should just stop giving as much as I can -- but this isn't a very logical sort of thing, I think. The whole breastfeeding process has been much more emotional than I anticipated, in all sorts of ways. There were days when I was so sad that Kavya wouldn't nurse that I was crying broken-heartedly all through the pumping. (If I were in a Laura Esquivel magical realist novel, I'd expect my grief to have somehow seeped into the breastmilk and made my daughter a sad and somber little girl.) The grief doesn't make so much sense in retrospect, but it was an intense emotion at the time. And right now, my emotions are telling me that I've done as much as I'm willing to do. I'm sick and tired of the interruptions to my day, the way we (by which I mean me, Kevin, our families, the writing workshops I go to, the dinners I attend, even my haircuts) have had to schedule everything we do around my pumping schedule. Enough.

So I'm down to three pumpings a day now, and by the end of the week, plan to be down to two a day. (For those unfamiliar, it's hard and very painful to just stop cold turkey, as it takes a while for your breasts to get the message. Much easier to slowly wean them off.) I'm taking Kavi out East to visit family and friends on November sixth; she'll be twelve days shy of six months at that point, and since breastfeeding to six months was our most recent goal (the original goal was three months exclusively, which I'm pleased and proud that we managed to meet), and it's going to be a hell of a lot easier to travel without all the pumping hassle, I think I'm going to aim to be completely done with pumping by then.

I have very mixed feelings about it all. I wish, of course, that she'd taken to actually nursing, which would have made all this easier to maintain -- but no use crying over spilt milk, as they say. I'm glad that when nursing failed, we made the commitment to try to pump for her. As for the pumping itself -- on the one hand, I almost wish that I had had the stamina to do more; if I had stayed with eight pumpings all the way through, even with the travel and everything else, maybe we could have maintained a full milk supply straight through to six months at least, or maybe even lasting to that holy grail, one year of breastmilk. But on the other hand, I've gotten so much of my life back -- more and more with every pumping session I dropped/day. I've had much more time to play with Kavi, to just enjoy her, and let her enjoy my company. I have to think that that's worth as much or more than saving her a few ear infections or a cold or two. Not to mention what it's done for my own sanity. They say a happy mommy makes for a happy baby; I hope that's true.

In the end, I guess I'm proud of the work I put in, and proud of Kevin for all he did to support me in it. (Lots of bottle and pump parts washing, for example, plus schedule rearranging, bringing me water and books to read and such once I'd started pumping, etc. and so on). I'll be a little sad when I'm not making milk for my little girl anymore, but so it goes. One thing finishes, and another starts. In a few weeks, she'll taste her first solids (probably a bit of rice cereal, or perhaps some mashed sweet potatoes or avocado). Eventually, that road leads to curry and creme brulee and all sorts of other delicacies. I can't feel too bad about her giving up breastmilk when a whole world of incredible food is waiting for my baby girl.