Facebook Instagram Youtube Twitter Patreon Shopping-bag
Menu
Hey, munchkins. Sorry for the long silence -- lack of internet in a variety of forms, followed by my sisters flying out from the East Coast for a three-day visit. It was great to see them again (and there will be many new photos of Kavi posted, as soon as Mirna sends them to me), but it did mean I was off the computer for days. We chatted, shopped, lounged about, and re-watched old romantic comedies. Well, we just watched one of them, but since it was Love, Actually with its multiple storylines, I think it counts for eight or so. It was a lovely time, and I hate that they had to leave. I'm going to go visit Sharmi (and my friend Roshani) in mid-November, I think. We'll see how Kavya survives the long plane flight from here to Philly. Or rather, how I survive it, travelling with her. She'll be just fine, even if she screams in irritation the whole way. (Which is mostly what she did all through the dinner we had in the city last night with our old friend Meera -- apparently loud-ish tapas bars are not Miss Kavi's favorite thing ever. Now we know.) 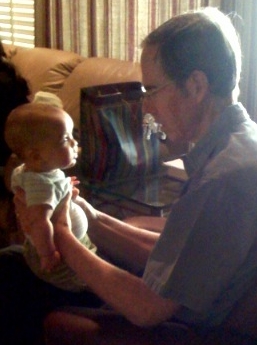 We also got to hang out with the other relatives, as we do most weekends; we're so lucky that they get this time with her (and we get a little break from her). Pictured right, a quiet moment with Grandad.

This week should be fairly quiet, thankfully -- it's felt a bit frantic ever since our arrival in the Bay Area, as I try to cram in lots of visits with friends and lots of writing and workshopping. I have got to get a good workshop set up when I get back to Chicago; the three that I've been involved with here have made it clear to me how much I missed having a workshop the last few years. We sort of have a small one set up through DesiLit, but it's been a bit erratic, and I'd rather have one that wasn't just confined to desis. (Although, of course, it's very useful for much of my work to have lots of desi critiquers in particular.)

Various people have mentioned that maybe I would be less stressed if I didn't try to write this fall and just hung out with baby. Which would be a fine plan and totally reasonable, I agree, except that for much of the last two years before baby, I didn't want to write, and didn't feel like I had any ideas. I had to force myself to do it, and it was sad and deeply frustrating. Whereas ever since baby was born, I have been positively bursting with ideas and feeling desperate to write. The timing is not ideal, but I have to at least try to get some writing done, or I swear, I will just go nuts.

The babysitting is definitely helping. We're pretty settled now into having Mya watch Kavi from 9 - 5 Tues/Thurs, which means I get to go to class, come home and have lunch and pump, then write in a caf for 2-3 hrs twice a week. It doesn't sound like much, but I can get quite a lot done in that time. And most weeks, Jed comes up on Wednesdays and I get another hour or two of writing done then. And some weekends, I can squeeze out a bit of a writing morning. So progress is being made, if not as quickly as I had hoped. I still have faint dreams of having a full draft of both the YA novel and the nonfiction book by Christmas. Am I insane? It sounds a bit crazed, when I put it that way, but when I do find a few hours to write, the writing goes so fast and smooth, that it all seems possible. We'll see.

I think we're making a bit of progress on the Kavi-sleeping front too, though I hesitate to say that too loudly for fear of jinxing it. Roshani (who is a pediatrician) had suggested that since my milk supply had dropped some, and we're now supplementing with a bottle of formula daily (which is the topic of its own very frustrated post at some point, but we'll leave it for now), that we give baby as much of that bottle as she'll take at her roughly 11-ish feeding. Since formula is heavier than breastmilk, the idea is that she'll sleep more solidly then. We haven't quite managed to do that consistently yet, so it's hard to tell whether it's working. But we did do it last night, and she did sleep pretty solidly from 11 p.m. to 5 a.m., only waking once, very briefly, to loudly demand her pacifier. And after the 5 a.m. feeding, Kavi did sleep pretty solidly for another three hours, so I feel reasonably rested today and able to cope with the world. I just don't handle lack of sleep (or interrupted sleep) well at all -- I think that's been a lot of what's been so unexpectedly difficult about having an infant. I get so damnably frayed without my sleep. But if she'll give me six solid hours a night, then I think we'll be okay, and we won't have to send baby out the window. Fingers crossed.