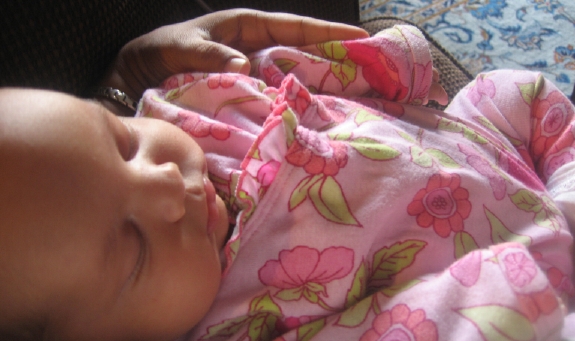 Susan and I went shopping at a resale consignment shop yesterday, Second Child. I was delighted to find a comfy pair of Majamas nursing pyjamas for me, and five (!) new outfits for Kavi. This has doubled the number of outfits I've bought for her -- I've been very restrained so far, because she was given so very many clothes in her various baby showers + Nilofer passing along stuff. But for $5 or so an outfit, they were very hard to resist, especially since they were a nice change from the standard Target / Carter's stuff we've been mostly dressing her in. The biggest difference between low-end and high-end baby clothes seems to be that in high end, you get some color options other than pastel pink/blue/lavender/green/yellow -- and of course, white. I love that this onesie is such a riot of bright color. Some of the outfits she'll have to grow into, but this one looks adorable on her already. (Kevin has accused me of liking baby clothes more than the baby -- not quite true, but too close for comfort. They are just so cute!)

We had some unexpected socializing as well yesterday -- Kirsten missed her connection at O'Hare due to delays, and ended up spending the night here. She arrived around 10, and we stayed up talking 'til past 11 -- I was so tired, I wanted to stay up longer, but just couldn't. I fell asleep leaning on Kevin on the couch, which they took as a sign to put me to bed. She's off already to try to go standby on an early morning flight, and for her sake, I hope she gets on it. But although all the travel difficulties were awful for her, I have to admit, it was a delight to me to get to show off my pretty baby to her. She also got to see how cute Kevin is with the baby -- I thought I was the only one who would appreciate that, but Kirstie also finds it adorable. She pronounced him 'smitten', which I think is just about right. :-)

Kevin did say that it felt like we lived on a farm these days -- we were up before dawn, and while I pumped milk this morning, he filled the birdfeeder, fed the dog, and fed the baby. (He forgot the fish.) What I want to know is, how come he gets to be the farmer, and I have to be the cow?