Hey, ho. So, we survived telling the folks -- at least sort of. Mine, of course, are unhappy that we aren't married and not planning to marry, and are pretty stressed out about what they're going to tell their friends. But I imagine their friends have probably figured out that their daughter who's been living with a man for over a decade and publishing smut on the internet has probably had sex outside the bonds of matrimony, so really, a baby is just confirmation of something that's already well-established. :-/ My mom was better by the second day; my dad is still freaking out, I think. If he doesn't calm down beforehand, he probably will once the baby gets here.

Kevin's folks, on the other hand, are absolutely thrilled, as expected. They're being super-sweet and charming about it all; Kev's mom started crying on the phone when we told her. They had given up hope of grandchildren, I think. Kev fooled them good. :-) 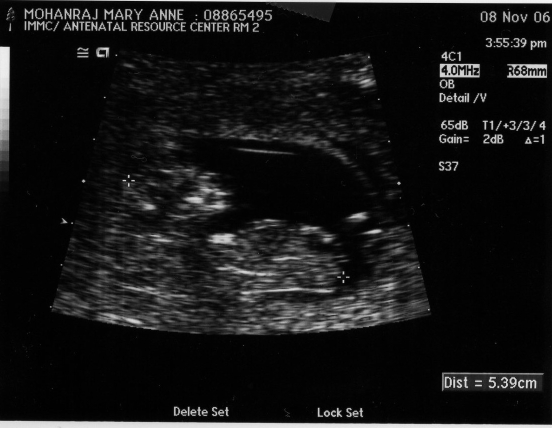 A bit delayed, here's the most recent ultrasound. It's a bit creepy -- if you look closely, I think you can sort of see a face, or at least the indentations where a face is going to be. (Again, look for the cross-hatches that mark the head and rump to find the baby.)

And for the curious, below is the first-trimester screening report. As you can see, the little bars do a pretty good job of showing how the estimated risk level decreased after the tests came back. Whew! 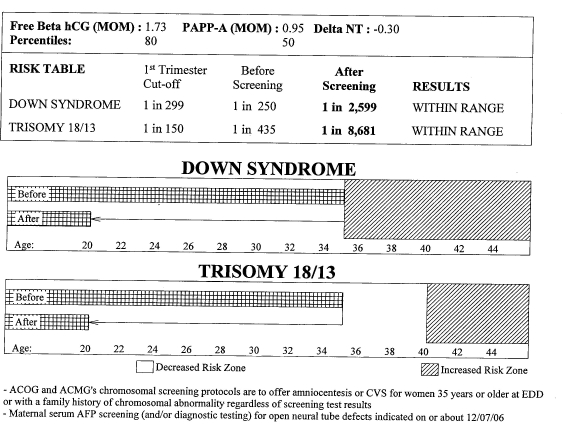