According to the calendar, baby became a fetus today. If I understand it right, the main difference from embryo to fetus is that while it's an embryo, the major structures are still forming -- at fetus, they're all there. It's astonishing that that happens in just eight weeks. Everything's there now -- it just gets bigger from here on. Congratulations, baby! You're a fetus! :-) Generic fetus photo at right.

And speaking of everything being there -- on Monday, I went in for my first ultrasound. I was a bit bummed that Kevin couldn't come with; he's in Israel right now, working with a colleague. But Nilofer offered to keep me company, which was great -- she remembered to ask various questions that I wouldn't have, and made sure that I got scheduled in good time for my upcoming triple screen test. The ultrasound for that will happen at eleven and a half weeks (so precise!), and Kev will be able to come along for that, so that's good. By that point, baby should be sturdy enough that it can handle the machine that lets us hear the heartbeat. Really looking forward to that. :-) 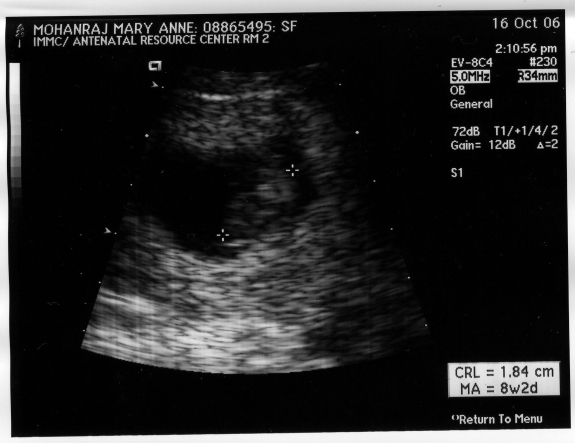 But in the meantime, they did give me a picture:

I know, I know -- it doesn't look like much of anything. But if you look at the little hatch mark crosses on it, you'll see the baby, from crown to rump, as they say. In fact, the crown-to-rump length measurement (CRL) is on that chart, at 1.84 cm, which is apparently just right. They agree with my estimate of how far along I am; it's nice to be proven accurate in my record keeping.

The ultrasound lady was really nice and pretty funny, actually. She was reassuring about the fibroids -- the big ones are nowhere near the baby, thankfully. Apparently the baby is 'nice and high.' She also told me that I had perfect ovaries. No one's ever complimented my ovaries before. :-) I think I have to give credit to my grandmother for passing those down -- she had nine children, so her ovaries must have been in pretty good shape.

What was really exciting was something that doesn't come across on the photo -- on the machine, you can see the heartbeat! It flutters remarkably fast, pulsing like nothing I've ever seen before. If anything could make all this feel real, that would be it, I think.

I'm still feeling sick and exhausted most of the time; I actually threw up in the lobby of our building yesterday, after walking the dog. Ugh. There are times when this whole pregnancy just feels like a misery, and I wonder why I ever wanted to put myself through this.

But seeing that heartbeat -- that made me really happy. Signs of good things to come.