Facebook Instagram Youtube Twitter Patreon Shopping-bag
Menu
I've been really tired lately, munchkins. Part of it's the new doggie, who needs much walking, which is tiring out sluggish me. Part of it's having trouble sleeping -- lots on my mind, and so I have anxiety dreams and wake up a lot. I don't think I've had a full night's sleep in a couple of weeks now. Partly it's just lots going on here. So posting may be skimpy for a bit.

Ellie is still adorable, and though not quite house-trained yet is getting better. She loves chasing us and other dogs. She comes and lies down with her back against my leg when she's tired; it's a more mellow version of the snuggling she did when we first got her -- I think she's relaxing more, as she gets to know us better and feel safer here. More photos soon.

We're a little worried that she has canine hip dysplasia; she exhibits a fair number of the symptoms. It means that she has some trouble jumping up on things now, and climbing stairs. Sometimes it seems like she doesn't run as fast when it's colder out, which may be the resulting arthritis acting up. Since she's a small dog, and slim, we should be able to manage it okay with meds, but it is sad. She's too old for the surgery that would have cured it, and too small for the surgery that would have given her an artificial hip (they don't make them in her size). Poor puppy. 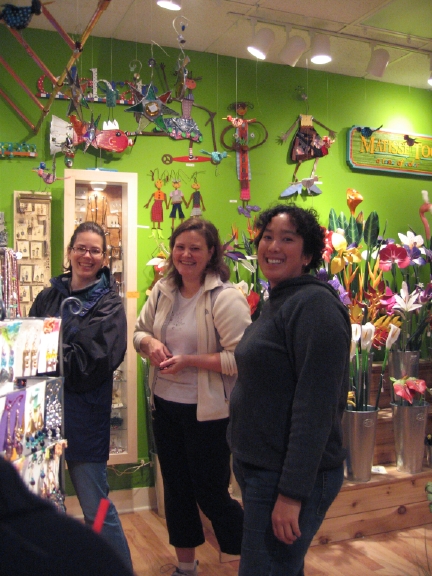 Other than playing with her and trying to train her, it's mostly been schoolwork around here. I did go away for a few days to Wisconsin for a mini-reunion with a few old friends from high school -- really nice, though I did spend part of the time I should have been relaxing instead stressing about all the work I wasn't doing. Sigh. Still, it was nice to see them (see right) -- also to get some Xmas shopping done early.

Today I'm hoping to write a little bit, draft another act or two of my play, and then I have a guitar lesson this evening. If I'm tired enough, I may not go. Just feel like I'm going to fall down.