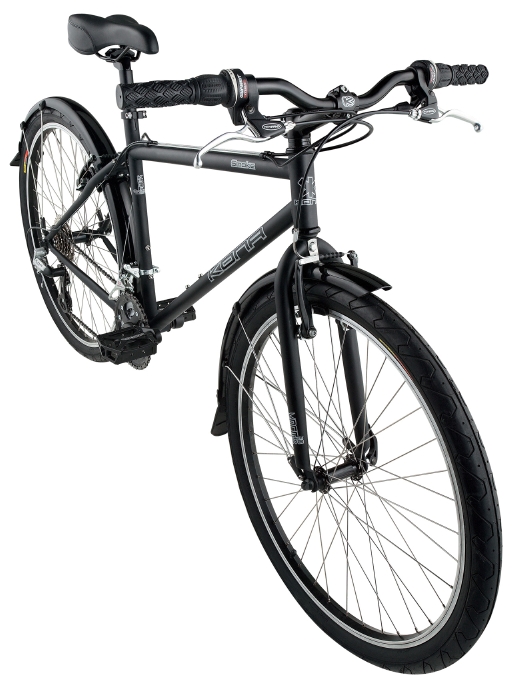 My birthday's coming up next Wednesday -- I'll be thirty-five. Every year, I buy myself a present, something I really want but can't quite justify buying normally. One year it was silk pyjamas. Mmm.... This year, Kevin and I bought me a bicycle!

The bike's the Kona Smoke, in matte black. It's what's called an urban bike, which I think means that it's built for sturdiness and stability, not speed. Which is just fine with me. The last bike I owned was in Philly, and was essentially an old-fashioned kids' bike that happened to be big enough to fit me. This is my very first grown-up bike. It has gears! I barely know what to do with them, but luckily, Chicago is mostly flat, so I don't have to do much. (It is cool that the gear change on this bike is sort of like a motorcycle's. Vroom vroom. :-) The bike feels really sturdy under me, and the tires grip the road well, even in rain. It's not a lightweight bike, and it doesn't fold up, but it's also pretty easy to get up and down my building (which has an elevator). I think I could lug it up a flight or two of stairs, but I'm glad I don't have to. Other people who aren't as weak as me probably wouldn't think twice about a few stairs. The bike looks super-cool, in a fierce urban kind of way, I think. :-) We added a rear-view mirror, which might make it slightly less cool-looking, but feels safer. I'm going to try it for a while, see what I need. Might add a rack in the back, and/or a bag or two. Maybe a bell!

We got the bike a bit early for my birthday, so I rode it for the first time yesterday. The traffic wasn't too scary, especially since a) I was following Kevin, b) we tried to stay on smaller streets. We did have to cross two major streets to get where we were going, but that turned out okay, especially when we crossed at a light. No cars honked at me, so I don't think I did anything too awful. And it only took about ten minutes to get to Humboldt Park, which is a huge park with a small lake, fishing, tennis courts, baseball diamond, swimming, etc. It was great fun swooping along the bike paths there, coasting by the lake, enjoying the pretty flowers (mostly black-eyed susans this time of year, although there was one lovely cluster of pink wild rose bushes).

Yesterday was our first cool day in quite a while, and it was drizzling very slightly when we started out (and a little heavier when we got back), which was really nice. I stopped near the end and got a sherbet push-up from the ice cream vendor, which is what we always used to get when I was a little girl at the park. It was all pretty splendid, and while I felt a bit tired when I got home (and crashed hard, early), I feel fine today. Not really sore, would be happy to go bike riding again. Fun!

1 thought on “My birthday’s coming…”