Facebook Instagram Youtube Twitter Patreon Shopping-bag
Menu
Various and sundry things going on, and I'm doing a terrible job of keeping up with them. For example, yesterday was Shmuel's birthday, and while I managed to send a card, I didn't manage to post about it here. So happy belated birthday, Shmuel! Congratulations on making it to the next year!

In other congratulatory news, Karina has finished and sent in her Ph.D. thesis! I am so excited! She's been in grad school part-time for quite a while now (when we met and started dating, she was working on her master's degree), and I know there were times when she wondered whether she was ever going to finish (or even should). But she finally made it through, with three hundred and twenty pages on the philosophy of love (paying special attention to monogamy and non-monogamy). I can't wait to read it! Yay, K!

Nilofer's also gone home, and is well settled with Baby Girl Ahsan (first name coming soon, really, she promises). Mama and baby are healthy and sleeping a lot. Baby Girl is particularly fond of ghazals and mama's breasts. Seems like good preferences to establish in one's first week of life. 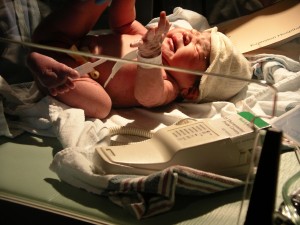 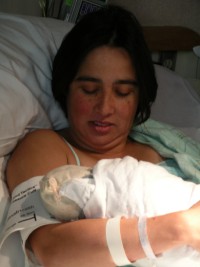 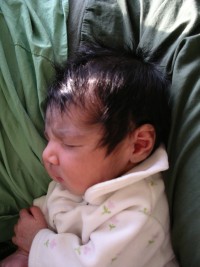 In quieter news in this part of town, I haven't been doing very much. Monday, Jed and I ran around doing errands -- I needed a new camera battery charger, cell phone charger, blue jeans. Somehow that took all afternoon. Tuesday, I had lunch with Cliff. Otherwise, I've mostly been hanging out with Jed, or reading. I re-read Crusie's Fast Women and finished Storywallah, which had some really great stories in it (along with some weaker ones). Well worth reading, whether you're particularly interested in South Asian literature or not.

And then last night, we drove up to S.F. and had dinner with Alex, Dan P., Charlie and Liz, which was fun, and included a memorable conversation on the sexual aspects of Doctorow's theories of 'whuffie.' Liz and I discovered that in addition to both having gone to the U of C (she went just after me, so I missed her while there, sadly), we share a similar attitude towards proper management of sex-related whuffie. I would explain further now, but it's really the sort of thing that's best explained over a candlelit dinner, accompanied by a nice glass of wine... :-)

Then we all tromped off to the reading around the corner, where I saw many more old friends -- Susan G., Tim and Heather, Pat M., Jeremy S., Cheryl, etc. and so on. Kev's colleague Peter also came, along with girlfriend Liz, which was awfully nice of them. Plus lots of people I didn't know. The reading started off on a sad note, with the news that Valencia Street Books is declaring bankruptcy -- another good bookstore down, and the owner told us that Cody's in Berkeley is closing too, which is hard to imagine. Imagine a world without independent bookstores. We're heading there fast.

But on a more pleasant note, we had a really good reading; a smallish crowd, but enthusiastic, and the readers were all great, including some who had never read in public before. This is what I love best about rapid-fire readings, I think, the way they provide an opportunity for people to read who might not have otherwise. And I discovered that although Jed has done plenty of reading before, he's never actually read his own work in a public forum -- startling. Jed is a good writer, and he should be writing and reading out more often! Y'all don't know what you've been missing... Hear more about the reading from Liz Henry. See Corie's photos

So today's a grading day, mostly, though I may take a few hours in the afternoon to go to a garden with Jed and Mya, if the grading goes well beforehand. Jed's doing all kinds of amibitious things to his backyard, and Mya's serving as garden consultant; the idea of the garden visit is that Jed will get to look at a bunch of pretty flowers and decide which ones he likes. Seems like a good plan, and a good opportunity to practice photography. So time to buckle down to work...

1 thought on “Various and sundry…”