Facebook Instagram Youtube Twitter Patreon Shopping-bag
Menu
The handyman came! Steve tells us that our humidifier is not broken, as far as he can tell, which I guess is a good thing, though we still don't know why it doesn't seem to be working. He says that the leak in our bedroom door frame that we noticed during the last storm is a roof problem which should be covered by the warranty on the roof. Fingers crossed that we actually have a warranty on our roof; otherwise, that could be very bad. He thinks he can run water from the humidifier up to our roof for a lot less than the plumber who gave us an estimate way outside our budget, especially since we're probably just paying him for using the best pex crimp tool on our far-from-the-best pipes; we'll see what Steve's estimate turns out to be. Fingers still crossed. I so want to have a real garden up there, and running water would be a huge help.

He hung the new chandelier (Home Depot, clearance sale, only sixty bucks) in the dining room -- once I pick up some bulbs, we will finally have enough light in what has been a very dim room. With the chandelier's curlicues, the dining room has become unabashedly on the romantic side, as opposed to the living room, which is still more spare and Kevin-like. :-) But Kev okay-ed the chandelier, so I guess he doesn't mind a touch of baroque. 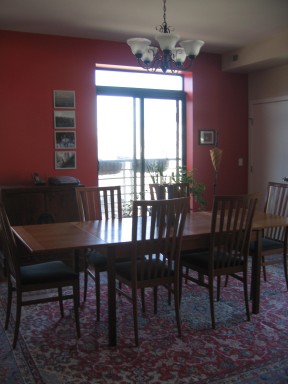 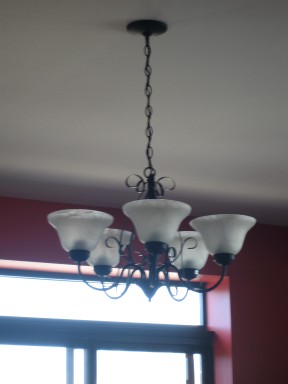 Steve also hung the Chinese wedding lantern in our bedroom (found at a nearby antique store, clearly designed to have a candle on its little internal spiked base originally, but adapted handily with a Home Depot make-a-lamp kit). Sorry the photo has such glare from the window -- not sure how to keep the camera from doing that. The lantern also needs a bulb, which I will go and pick up now. :-) 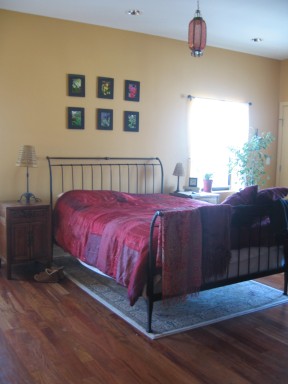 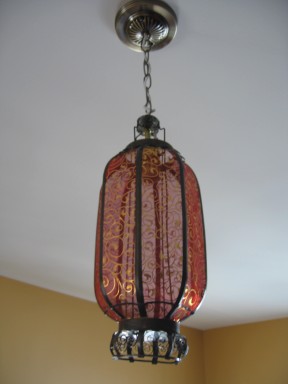 Plan for the rest of the day -- run errands until 1, then exercise, eat, and drive up to Milwaukee, aiming to be there by 4-ish. Have tea with Roshani, then meet the members of DesiLit Milwaukee for tea and probably dinner. Spend the night. Drive back early tomorrow for a department meeting at 10:30.