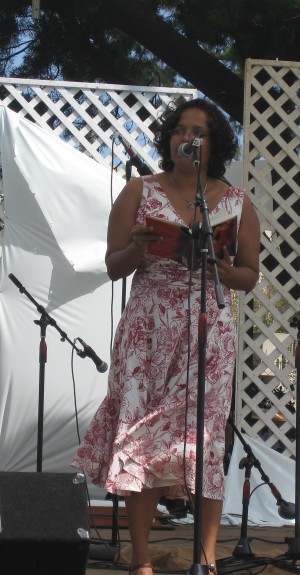 I'm having a really nice time in L.A. Arrived on Friday and went to the site (long long travel day, too tedious to detail, but a good 12 hrs in transit, ugh), ran into Abha Dawesar (author of Babyji) and met some other authors and artists, including multiple Sri Lankans, which was very cool. One of them, a poet, may make it to Kriti. Hung out there for a while, enjoying the art reception, and then Lisette picked me up around 8 (11 p.m. my time). In a bit of a daze, I followed her up and down Melrose as she tried and failed to find a leather jacket for a photo shoot, and then we sat down and had sushi, good. Came back to her place and crashed.

The next morning, lounged about, resting. Swam in her pool, lovely. Talked more. Was dropped off at Artwallah, did reading, went well enough, I think, although an odd venue -- outdoors, read standing up in a park, rather than sitting indoors at a table, as is generally the case. Kind of fun, and I was glad I wore a dress that fluttered pleasantly in the breeze. :-) I'm not sure they're really set up for lit stuff; the mindset of the organizers and the attendees seemed more appropriate for a music venue, but I don't know if I can really explain that, other than to say that there were no questions after our reading, which has never happened before.

I was suprised and delighted to see Zak and Sharon at my reading; they'd driven two hours to attend, which is just utterly sweet. We went out after the reading for high tea at Chado, meeting friends of theirs. V. nice. I am so happy with little sandwiches with the crusts cut off, a good scone with clotted cream and strawberry jam, and of course lots and lots of tea. Zak also took photos of me reading, plus some video, which I don't know how to post yet.

In the evening, went to a family party at Lisette's other best friend's house, and had a nice time talking with David and David's partner and David's sisters. Ate yummy grilled food and drank cider. Relaxing, though I did get fiercely mosquito-bitten. They love me, they do.

This morning, I dragged Jenn Reese out of bed early to have breakfast with me, because I thought Lisette and I were going to a 9:00 karate class. Only five minutes before Jenn was to arrive, I found a note from Lisette saying that she had been up sick until 3 a.m. and was going to have to bail on class. Oops. I had also slept badly, only getting to sleep around 2:30 myself, so more sleep would have been nice, but oh well. Jenn and I had a lovely time anyway, having two hours of breakfast at Hugo's and catching up on each other's lives. I like her lots. I want to spend days with her, trading music and life stories. I wish I saw her more often than three times a year at conventions. Sometimes I get really frustrated by how scattered all my friends are. But then other times, I'm really grateful that I have friends in all these cities that I can see when I'm wandering around -- they make the travel not just bearable, but fun, even when I'm also longing to go home.

Today, hang out at Lisette's for a bit, go to Artwallah and do one more reading at 3, go home. 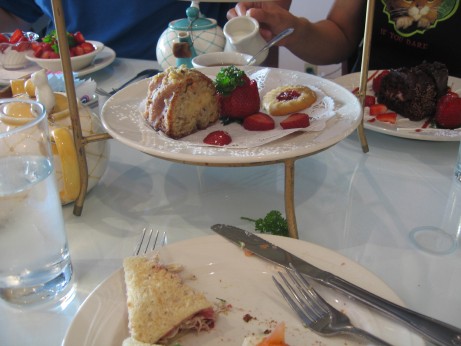 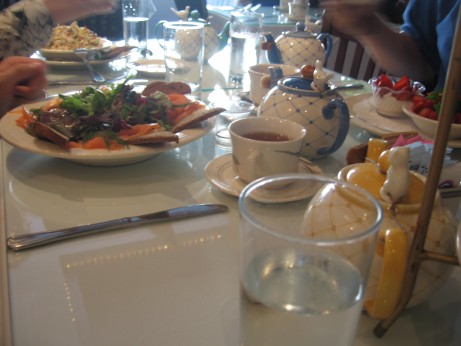